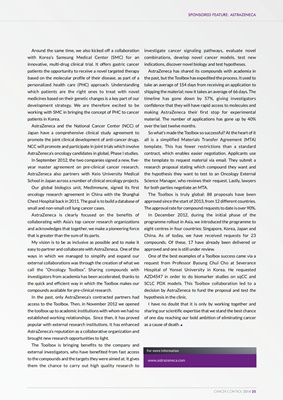 From the Millennium Development Goals to a post2015 agenda

In September 2000, when world leaders came together to

which included health goals targeting a reduction in child

health by 2015, cancer and other non-communicable

diseases (NCDs) were largely absent from the agenda.

This had a negative impact both on the level of global

political attention accorded to the prevention and control of

NCDs, and on the levels of bilateral and multilateral funding

directed to tackling the NCD epidemic in low-income

billion) of overall development assistance for health was

allocated to NCDs in 2007.1 Similarly, although the World

Health Organization's (WHO) budget for tackling NCDs has

gain momentum, the cancer community has a unique

opportunity to influence the agenda by feeding into the

consultation process led by the United Nations (UN) to define

expert groups and high-level committees have been

established to guide the consultation process, which has

consultations and discussions and generated a series of

reports including the Report of the High Level Panel (HLP) of

and the Report of the Secretary General5 published in July

2013. The Union for International Cancer Control (UICC) has

worked closely with its members, partners and the NCD

Alliance6 to draw attention to the NCD burden through a

series of think-pieces, policy briefing papers and analyses of

the various reports highlighting the need for health and

NCDs to be integrated across all dimensions of the post-2015

Whilst these reports acknowledge health as a driver, an

outcome and a measurement of development, and recognize

NCDs as a social, economic and environmental challenge for

With the expiry date of the Millennium Development Goals fast approaching in 2015, the

development goals, and ensure that cancer prevention and control are no longer

sidelined. The adoption of the UN Political Declaration on Non-communicable Diseases in

2011, which recognized NCDs as a global health and development priority, has helped to

advocacy efforts at the global and regional level and nationally. These efforts must be

supported through innovative partnerships within and beyond the cancer and health field;

collaborative partnerships, within the NCD framework, but also for reaching out to new

players in the broader health and development community.