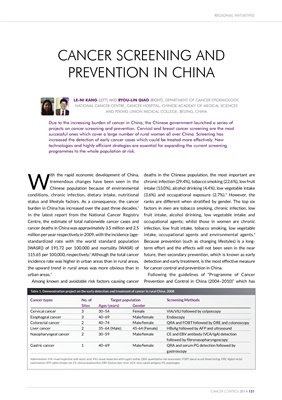 been endorsed by World Health Organization as an example

of a top-down planning process5

, a series of demonstration

projects have been proposed by the Cancer Foundation of

China and sponsored by the central government. At the very

established for cervical cancer; one in Xiangyuan, Shanxi

Province, for a rural model and the other in Shenzhen for an

urban model6 and two esophageal cancer sites for the rural

model in the Grand Junction Area of Taihang Mountain in

1). The target population and main screening methods for

each cancer in this demonstration project are listed in Table 1.

Based on the experience gained from the demonstration

projects and other countries, screening for cervical cancer

and breast cancer are the most effective ones with developed

technologies, which could be implemented on an extensive

scale. After expanding the project sites for cervical cancer

cancer screening was implemented on 221

sites across China with free

or Pap smear; and breast

in China with free clinical

In spite of this effort, the

estimation of the total

women in the target age

who need this kind of

At the current rate of

expansion, it would take

to screen each woman within

this age group once. China

cannot wait any longer to

take measures to avoid this delay in screening.

With strong support from central government, this project

is continuing and has been tripled to 10 million women for

screening per year from 2012. However, the limited capacity

of the current health service in China requires new highly

efficient technology to realize the goal of nationwide cervical

cancer screening. HPV DNA testing has been proved to be an

effective method for primary screening in both developed

and developing countries.9-11 Recently, the new rapid and

simple HPV DNA testing, careHPV, has been developed and

evaluated in multiple countries.12-15 It has a high sensitivity,

moderate specificity, and can test both clinician- and selfcollected specimens at 90 tests per run with a lower cost. This

technology has been approved by China Food and Drug

Administration in 2012 and is now in production. Combined

with self-sampling, HPV-based screening could improve the

participation rate to some extent, while the sensitivity is much

higher than VIA/VILI or Pap smear.

promoting these new technologies or strategies to the current

Besides nationwide implementation, screening for other

major cancers was also expanded in other high-risk areas. As

of 2013, there have been 110 sites for upper gastrointestinal

Figure 1: Map of demonstration sites for early detection and early treatment of cancer in China, 2008