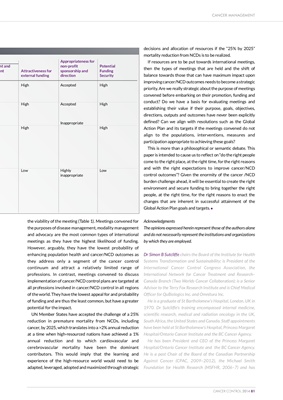 served on the Boards of CPAC, MSFHR, and Genome BC. He is

an Adjunct Clinical Professor at the University of British

Columbia and an Associate Scientist with the Michael Smith

Genome Sciences Centre at the BC Cancer Agency.

Gold Medal in 2003, and the Terry Fox Award of the BC Medical

Association in 2009 for his lifetime services to cancer control.

redesign projects with the health authority in British Columbia.

Her career path has taken her from a Director in International

Catherine Sutcliffe is an Assistant Scientist in the Department of

Epidemiology at the Johns Hopkins Bloomberg School of Public

Health. She has a master's degree and PhD in epidemiology and

interventions to prevent and treat childhood illnesses in low

and Knowledge Management at the Canadian Partnership

Against Cancer. He joined the organization in 2008, after 20

years as a peer-reviewed and funded cancer control researcher

and eight years as a research deputy division director at the

NCI/NIH in the United States.

the Louisiana State University School of Public Health in New

Orleans, USA and Professor and Wendell Gauthier Chair of

Cancer Epidemiology. He has been been working in Cancer

Prevention and Control for nearly 30 years.

and Opportunities. London: The Economist Group. Available at