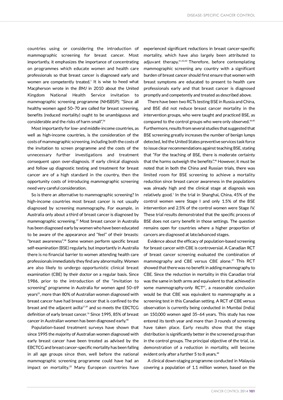 principles of early diagnosis and referral and competent

most women were then being diagnosed with early

potentially curable breast cancers. So the experience of many

high-income countries in Europe and Australia of falling

breast cancer-specific mortality is being replicated in a

middle-income Asian country and emphasizes the

importance of educating women to be "breast aware" so that

they detect changes in their breasts early. They must be

educated to visit a health care professional as soon as any

breast abnormality is found and there must be a system of

referral for diagnosis and competent surgical and adjuvant

The recommended adjuvant therapy by the EBCTCG of

therapy is now very cheap and almost equal in effectiveness

to much more expensive chemotherapy with taxanes and

mammographic screening in higher income countries has not

ago and concluded with the AGE RCT for women aged less

For low- and middle-income countries, education

programmes that make women breast aware, together with

the removal of financial or cultural barriers to access to a

who present with breast abnormalities is the optimal

approach.52 However, it is critical that a system of affordable

and competent primary health care, which can offer CBE and

refers women with abnormalities for further diagnosis and

treatment are in place before women are educated to try and

breast cancer would only make them anxious and reduce

their quality of life, unless there is a health care system that

can competently follow up on any breast abnormalities that

are discovered and diagnose and treat them competently;

adjuvant therapy is a critical component.

Although the benefits of early diagnosis (down-staging)

programmes have had little study, and their effect on breast

cancer has not yet been comprehensively assessed, WHO

recommends this approach as the minimal breast cancer

WHO guidelines state that "A cancer screening programme is

a far more costly and complex undertaking than a downstaging programme.

Therefore, where resources are limited,

and where the majority of cases are diagnosed in late stages,

down-staging of the most frequent cancers, linked to

appropriate treatment, is likely to be the best option to

reduce premature deaths and suffering due to cancer."

There is a caveat to following this advice without a careful

analysis of resources for breast cancer control. "A major

potential hazard of a population early diagnosis programme is

women with breast complaints, given that up to 95% of

breast symptoms reported by women may not be cancer. In

this regard, the content and the quality of the breast

awareness messages delivered to the public are critical".1

FRACP, FAFPHM currently works at the Department of

Professor Robin Bell is a medical epidemiologist with over 30

years experience working in women's health. She is the Deputy

Director of the Women's Health Program within the School of