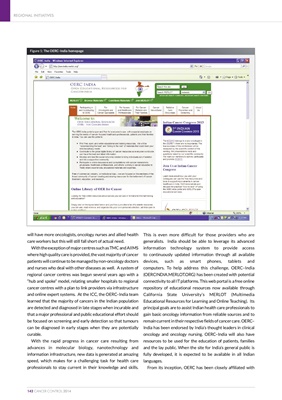 Research) led by Dr Ian Magrath (who serves on the OERC

Executive Committee) and is based in Brussels. The

OERC-India plenary presentations at ICC by Drs Lessin and

Pillai, in fact, opened with a 2-minute video by Dr Ian Magrath

outlining the mission and goals of INCTR and its relationship

to OERC. The plan for OERC-India and its objectives have

been previously described in detail in INCTR's annual

Thus, oercindia.merlot.org was effectively launched at the

ICC, with Dr Badwe of Mumbai, Medical Director of Tata

Memorial Hospital, assuming the position of Editor in Chief

and appointing editors for medical, surgical and radiation

oncology, as well as oncology nursing and prevention and

screening from the TMC faculty. Dr Rajagopal of Kerala will

serve as Editor for palliative care and Amb Balakrishnan,

OERC-India is an open and free metadata repository of high

quality educational materials selected by and for Indian

cancer health care providers, based on the assessment of

educators and thought leaders. As with the main OERC site

(oerc.merlot.org), OERC India will continue to be hosted and

supported by the professional education and technical staff at

oncologists and nurses at the ICC greeted the OERC-India

launch with great enthusiasm and confirmed their collective

contribute educational materials and curricula to the site and

to actively utilize the educational modules for the preparation

"demystify" cancer and its treatment and to move the Indian

"war on cancer" into the public domain with education,

The ICC oncology nursing workshop was well received by

settings. This was especially evident in the large numbers who

attended the one day workshop session that focused on

impact, communication, palliative and preventive care. It was

clear that the establishment of oncology nursing as a specialty

had begun in India and several curricula had been developed at

regional centres. Discussions and questions during the ICC

lack of resources in most clinical settings as well as limited

resources for advancing educational levels or preparation for

the role of oncology nursing from basic nursing education

post-graduation. Most oncology nurses in India graduate with

a basic nursing education and need advanced education on

pharmacology and administration, symptom and side effect

whereas there are a few institutions that provide a one-year

This is an opportunity for OERC-India to provide free open

educators and administrators at these institutions can

download and use. This notion was received well by nursing

college professors and administrators. A need to follow-up on

this first visit is due and is planned for the near future. Indian

oncology nurses who attended the workshop were keen on

Singh-Carlson and Jeanne Sewell as part of the demographic

data collection, so that they could be contacted later requiring

educational needs. This information will be used as a follow-up

to assess the Indian nurses' needs before developing any

from government to a "war against cancer" was in its early

stages, with a need to mount a major national anticancer

public education campaign. This was validated in the ICC

visits by the OERC team with government officials and at

private institutions. The economic impact of cancer as a

leading cause of morbidity, mortality and lost productivity for

a population of 1.4 billion people was well understood.

However, mechanisms to stem this suffering and economic

loss were in early stages of development.

From its inception, OERC has been

Treatment and Research) led by Dr

Ian Magrath (who serves on the

OERC Executive Committee) and is