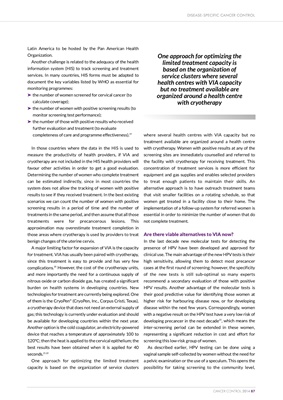 and saving pelvic evaluation for those who are positive on an

HPV screening test. If a triage step is desired, VIA is a

valuable test that can be implemented for evaluation of the

high-risk HPV-infected group of women, although it is

result in some loss of overall sensitivity.24 Additionally, VIA as

a triage test will help to identify women suspected of having

specialized treatment. VIA will also identify women with

large intra-epithelial lesions who are not eligible for

cryotherapy and need to be referred for excisional

Even though molecular tests have the highest sensitivity

for detection of precancer and cancer of the uterine cervix,

there are still some limitations for their introduction in

implementing the technology is high, and countries would

require support for the start-up and introduction in a

population-based programme. This initial investment would

risk of precancer is minimal within the next decade. Another

challenge is the need for developing algorithms for screening

and management of women with positive HPV results. In

order to fill this gap, WHO recently released its new

guidelines for screening and treatment of cervical cancer17;

using HPV testing, and triage of the positive women using

diverse options such as VIA or Pap smear. It is the

responsibility of each country to determine which algorithm

is more suitable for their population.

What impact will HPV vaccine have on VIA

Although it has only been seven years since HPV vaccine

introduction started, there are already some early signs of an

impact on screening. In Australia, young women who received

United States, the proportion of cervical lesions that had HPV

among vaccinated women than among unvaccinated

high-grade lesions; if these are prevented, screening

programmes will have considerably fewer screen-positive

women to treat and follow up. How soon the benefit will be

seen after vaccination starts depends on the age at which

than age 30 will see a decline sooner, since HPV 16 is

the vaccinated cohort comes of age. Even with the crossprotection against HPV types not included in the vaccines27

and a new 9-valent vaccine that will probably become

available in the next year or two, screening will still be needed

for at least the next three or four decades until fully

Because a vaccine will make high-grade precancerous

lesions much less common, it will also make screening by

visual methods (VIA or Pap) more difficult since positive tests

will be relatively rare, giving screeners much less experience

seeing positives. The lower incidence of precancer will, of

tests and increase the cost of identifying precancer.1

For programmes that vaccinate at age 10 or so and start

screening at age 30, as recommended by WHO, it will take 20

years after a vaccine is introduced before an impact on

screening will be seen and 30 years before an impact on

cervical cancer incidence and mortality is measurable. If we

do not increase screening services above the current levels,

next 30 years and 9 million deaths, nearly all of which are

avoidable by screening and precancer treatment.

Rationale for continuing to invest in VIA and

Despite these advances in vaccination and more sensitive

molecular tests, it is clear that there are compelling reasons

for continuing and even accelerating the investment in

programmes based on VIA and precancer treatment. VIA is

an effective and feasible screening tool that can be used

where molecular tests are not yet widely available, starting

with once-in-a-lifetime screening and increasing frequency

Even though molecular tests have

the highest sensitivity for detection

of precancer and cancer of the

uterine cervix, there are still some

limitations for their introduction in