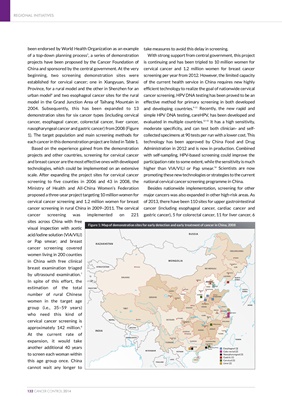 and prevention in rural China, especially on the population

Professor You-Lin Qiao is Director of the Department of Cancer

Epidemiology at the Cancer Hospital of the Chinese Academy

China and Deputy Director of the National Expert Committee

for Cancer Screening and Prevention in China. He coordinates a

large number of cancer early detection studies in China and has

contributed to the development of validation for rapid,

accurate and affordable HPV tests for early detection of

cervical neoplasia. His research efforts have led to the rolling

out of large population-based breast and cervical screening

programmes in China. He received 2011 WHO/IARC

for nasopharyngeal cancer and 3 for lung cancer in rural

areas. From the latest Annual Report,17 the early detection

colorectal cancer; and the treatment rate ranged from 75%

for lung cancer to 100% for nasopharyngeal cancer (Table 2).

In addition, this project also provided training for a group of

technicians and clinicians who work in primary health care

institutions. This project has been introduced into urban

areas in China from 2012 and targets screening for lung

With more than one fifth of the world's population, as well

as the increasing cancer burden in the contemporary Chinese

population, China's fight against cancer will have a global

impact on human health. The experience in cancer prevention

and control in China will also help other low- and middleincome countries, which account for 60% of the world cancer

burden, to fight against cancer. l

5. WHO Technical Advisory Group. Cancer control: knowledge into action: WHO guide for

Society for Clinical Pathology screening guidelines for the prevention and early

human papillomavirus DNA testing as a primary screen for cervical cancer: a pooled

analysis of individual patient data from 17 population-based studies from China.

for cervical-cancer screening in developing regions: a cross-sectional study of