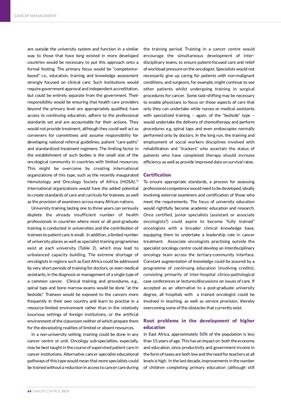 averaging less than 70% in East Africa has caused a

"bottleneck" in secondary education, overwhelming the

number of available places. Teaching quality for children in

have suffered from malnutrition and anemia, which are

known to impair cognitive development, limiting the ability to

learn. Up to 80% of the population live in rural regions where

services are more difficult to provide over the large areas that

must be covered. Out-of-school rates vary from 2% in

literacy rates, which are in the 50-90% range and lower in

While many solutions are possible, one worth considering

would be the establishment of pre-medical schools to provide

the equivalent of secondary education at any age, thus

increasing the fraction eligible for a university education and

increasing the output of trained doctors, and in turn, a larger

pool of individuals for specialist training. UNESCO is leading

an effort to broaden access to education through its

"Education for All Program (EFA)"11 and there are high hopes

for the Pan-African University launched in three African

countries (Kenya, Cameroon and Nigeria) in 2012. Although

progress is being made, 31 countries in sub-Saharan Africa

will reach the goals of the EFA programme only after 2020.

Uganda, for example, has four public and five private

three private, and Kenya three public and one private

training next year. Average class size in Uganda is 280, in

Tanzania 302.12 Recognizing that many doctors who graduate

will migrate, a higher class intake is necessary to meet

time, but it must be recognized that part of the problem is the

limited number of young people with sufficient education to

go to university and too few appropriately qualified

university teachers to educate them.

Use of informatics for education and care

Hospital-led educational programmes for specialists do not

require that practising oncologist give up their attendance at

lectures or other formal education sessions. A significant

proportion of the knowledge required by a specialist can be

provided by distance-learning (educational institutions are

thus, no longer defined by bricks and mortar, but by

developed in country, or by external experts, may be used in

many different centres across the country whether delivered

on-line, via CD or DVD, or downloaded to a computer or

mobile platform. Students can choose, depending upon their

clinical responsibilities, when and where to study, how

frequently to review difficult elements and how to become

a student to assess their own progress and repeat elements

of the curriculum on which their personal test scores are low.

Mobile platforms (smart phones and tablets) may also include

reference materials too bulky to transport in hard copy, such

as treatment protocols, drug side effects, etc. Having a library

of information at "one's finger tips" saves time and effort

looking for information in a physical library (which, in any

event, is likely to be poorly stocked). Laboratory results,

imaging studies and pathology reports can be made available

electronically and there is less risk of losing patient

information than when this is purely paper-based. The

University and Training Network for Cancer Control in

materials regardless of their location.13 INCTR's OERC

Programme (see elsewhere in this volume) could also

Dr Ian Magrath is President of the International Network for

Cancer Treatment and Research (INCTR) and received his

medical qualifications from the University of London, UK. He

holds a higher doctoral degree (DSc) in Medicine from Imperial

College, London University, and is a Fellow of the Royal College

of Physicians and the Royal College of Pathologists. Following

two years as Director of the Lymphoma Treatment Center in

Kampala (University of Makerere), Uganda, he joined the

and became Chief of the Lymphoma Biology Section of the

cancer control in developing countries and has been involved in

the conduct of cancer control projects, clinical trials and basic

research in many parts of the world, including India, Pakistan,

Kenya, Nigeria and Egypt. In 2000, he became President of the

(INCTR) in Brussels and is now retired from NCI.

reviews, commentaries and editorials relating primarily to the

pathogenesis and treatment of malignant lymphomas,

paediatric cancers, cancer in developing countries and EBV. He

has also edited several books, including Pathogenesis of