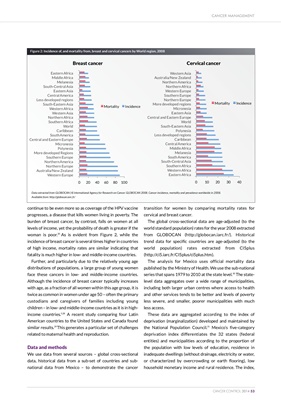 which is derived from classifying the Mexico's approximately

2,500 municipalities that vary greatly in population and

socioeconomic conditions, is closely aligned with the level of

poverty. The most recent index was calculated in 2010, using

census data, and the data presented below apply this

categorization retrospectively to the entire time series of

earlier indices by period with little change in the overall

cancer deaths. The trends over time are little affected by

sensitivity analysis that reclassifies a proportion of deaths

Both incidence and death from cervical cancer, a disease that

can be prevented,33 is increasingly concentrated among poor

women. At the same time, the burden of breast cancer is

rising in these same populations.

A recent analysis of the global burden of cancer in relation

to the Human Development Index (HDI), showed that breast

cancer incidence rates have been increasing in almost all

regions in the world, irrespective of the level of economic

development.25,34 By contrast, the incidence of cervical cancer

has been declining in most regions, including countries of

both higher and lower income, with the exception of only the

6,25 As a result of these diverging

become the most common female cancer in the majority of

countries with the exception of some of the poorest countries

where cervical cancer is still the most common cancer among

women. Consequently, regions made up predominantly of

low- and middle-income countries are facing a dual female

incidence burden from cervical cancer as well as an emerging

high incidence burden from breast cancer. As survival from

both breast and cervical cancer are positively associated with

level of socioeconomic development, a greater proportion of

the mortality burden is also seen in less developed regions.

Long-run trend data on cancer incidence are sparse,35 but

cancer transition, which began in high income countries (i.e. in

and is now evident in low- and middle-income countries (i.e.

all other regions). For instance, in Denmark, the age-adjusted

incidence of breast cancer surpassed that of cervical cancer

prior to the 1950s, with the differential growing due to the

marked increase in breast cancer over the next five decades

(Figure 1a). The cross-over in the age-adjusted incidence

rates of these two cancers occurred much later in Asian and

The cervical-breast cancer transition, and its

consequences, can now be clearly observed in Africa, where

become the most common female cancer in the continent.36

Certain regions in Africa now have the added challenge of not

from cervical cancer worldwide, but also the growing

rates are lower than in wealthier countries, mortality rates

In the case of Mexico, the women´s cancers transition for

women from the mortality data that span the period 1955 to

subsequently fell continuously, reaching a low of just close to

mortality rose steadily until the mid-1990s and has since

since that point in time, breast cancer has been the leading

cause of cancer death in women.

The equity aspects of the women's cancers transition in

Mexico is most clearly seen by analyzing within-country

trends. The 32 states are classified into five categories

according to their level of marginality (a composite index of

poverty and access to basic services where high marginality is

associated with the greatest poverty). In the 1980s, the range

in marginalization-specific absolute differences in cervical

versus breast cancer rates was relatively small. This is largely

because cervical cancer mortality rates had not yet peaked in

the poorer states and because the middle-income states had

not passed far into the transition. By the late 1980s, the

overall pattern is quite clear: the absolute differences in the

difficulties in identifying the origin of the cancer as cervix or corpus uteri.32

This could bias our results by underestimating the number of deaths

attributable to cancer of the cervix. This bias could be associated with

poverty, as miscoding may be more likely where training and human

cervical cancer, the rationale being that cancer originating in the uterus is

very uncommon in younger women. The trends over time are little affected