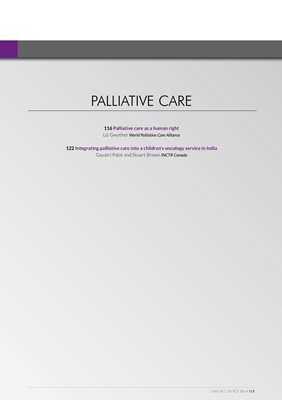 provision of palliative care, it has been recognized that

palliative care is an appropriate and compassionate

response to the needs of patients with life-threatening

illnesses. This is true for cancer patients and for those with

other chronic progressive illnesses. However, there are

significant inequities in the provision of palliative care

one or more hospice-palliative care services.1 In 2011, there

countries (33%). Twenty-three countries had some capacitybuilding potential for palliative

only 20 countries (8.5%) have achieved this integration.

This inequity and significant gap in provision of palliative

care has led the international palliative care community to

using a human rights approach to urge states who are

signatories to the International Covenant for Economic,

core obligations for the provision of palliative care in their

countries.2 There are a number of key statements that urge

the most recent being the Prague Charter which makes the

statement that: "Access to palliative care is a human right

under the right to the highest attainable standard of physical

and mental health".3 However, although it seems clear that

from a moral and compassionate standpoint that palliative

care should be recognized as a human right, it is necessary to

identify the legal foundation for this claim through the

documents of the United Nations General Assembly. It is one

thing to name something such as palliative care as a human

there has to be a process to establish this claim. There are

to health is described within the International Covenant for

treaty body is a committee of international experts to

monitor the implementation of the core international human

rights treaties. The Committee for Economic, Social and

Cultural Rights monitors the implementation of the ICESCR.

guidance with respect to the international treaties as general

comments. General comments are not international laws but

are used by courts to interpret matters with regard to the

treaty, such as ICESCR for matters regarding health.

What are human rights?

The Office of the United Nations High Commissioner for

to all human beings, whatever our nationality… without

discrimination".5 The Preamble to the Universal Declaration

"recognition of the inherent dignity and of the equal and

inalienable rights of all members of the human family is the

foundation of freedom, justice and peace in the world".6

living adequate for the health and well-being … and the right

to security in the event of unemployment, sickness, disability,

The UHDR, the International Covenant for Civil and

Political Rights and the International Covenant for Economic,

Social and Cultural Rights, together known as the Bill of

Rights, were developed before modern hospices were

established and before palliative care was developed as a

discipline. However there have been a number of more recent

documents that do address palliative care as a human right.

The right to health is addressed within the ICESCR and in

AS A HUMAN RIGHT

The right to palliative care is enshrined in many documents and agreements. This article explains

how human rights relate to palliative care and where to find the relevant information, as well as

the need to remove barriers and integrate palliative care into health care.