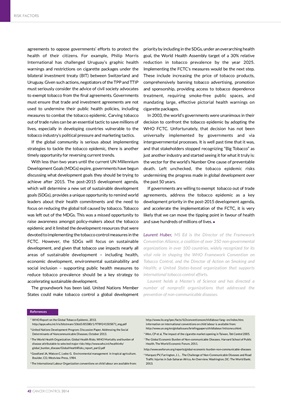 he harm caused by tobacco has been established

for decades, yet still one in five adults in the world

it is estimated that tobacco will cause approximately 8

million deaths per year by 2030, and 1 billion total deaths

in the twenty-first century, the majority of which will

occur in low- and middle-income countries.2 While

outcomes, it is estimated that one in five cancer deaths

worldwide is caused by smoking.

that 33% of all tobacco-related deaths worldwide will be

from cancer (Figure 1). Tobacco use is the only risk factor

(Figure 2), and tobacco use must be addressed globally in

About The Tobacco Atlas

The Fourth Edition of The Tobacco Atlas was published in 2012

by the American Cancer Society and the World Lung

Foundation, and released at the 15th World Conference on

Tobacco or Health in Singapore. The first edition of The

Tobacco Atlas was published in 2002 by the World Health

Organization. The original Atlas preceded the WHO

GLOBAL TOBACCO USE AND

Tobacco use harms nearly every organ of the body and results in 6 million deaths annually. One

in five cancer deaths is caused by smoking and the death and harm from smoking is preventable.

While the relationship between tobacco and cancer is clear, it is further explained using statistics

and findings from The Tobacco Atlas, a tobacco control tool and global reference for monitoring

tobacco use prevalence, trends and statistics.

By cause, 2015 baseline scenario

Meeting on Non-communicable Diseases, and considerable

changes in global tobacco control and illustrates the global

progress in tobacco control over the past decade, which has