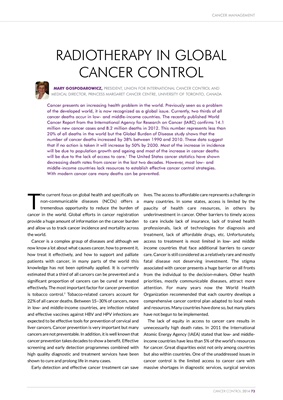 and huge gaps in access to radiotherapy. The "Closing the

Cancer Divide" report by the Global Task Force on Cancer

Care and Control highlighted that between one third and a

half of global cancer deaths are avoidable and 80% of these

are in low- and middle-income countries.2

radiotherapy. Radiation therapy is recognized as an essential

tool in the cure and palliation of cancer, and is indicated in

over half of new cancer patients.

3-12 The number of patients

who would benefit from radiotherapy during the course of

their disease has been reported to range between 40-62%.

The number depends on the extent of disease at

presentation and the profile of the cancers observed in the

population. The profile of cancers seen in childhood and

malignancies and fewer solid tumours is associated with a

lower demand in young patients, in those with haematologic

malignancies, and a larger demand in older patients with

Radiotherapy plays an important and significant role in the

management of some of the most common cancers in the

head and neck. In low- and middle-income countries, the

need for radiation therapy may be higher because of the

advanced stage of disease at presentation.

inadequate in many countries. The access to radiotherapy is

seriously limited in many low- and middle-income countries

and non-existent in others. The lack of radiotherapy

resources has been highlighted by the IAEA for several

decades. Although the lack of radiotherapy resources is most

acute in low-income countries, underinvestment in

radiotherapy has been documented in all parts of the world.13

The delays in radiotherapy have been shown to be

associated with poorer outcomes yet waiting lists are

The IAEA is a United Nations agency that deals with the

nuclear industry. A small part of its efforts are devoted to

countries that send reports for the IAEA directory, 40 have

no radiotherapy at all. The 2010 IAEA publication estimated

a need for an additional 7,000 radiotherapy machines in the

world. Although the number of radiotherapy machines and

centres is a good surrogate for access, the geographical

distribution of equipment also matters. It has been shown

that the utilization of radiotherapy drops sharply with

The recent publication from IAEA stated that 80% of

example, 29 of 52 African nations have no radiotherapy

facilities at all, and these 29 countries comprise an estimated

198 million people. The availability of radiotherapy

equipment varied from 8.6 machines per million people in

and 0.21 per million in low-income countries.

A recent review on planning cancer control activities in

per 10 million people reported in Bolivia and 18 machines

for 3.3 million people in Uruguay.17 Although the IAEA

has been questioned and the information has not been

radiotherapy planning and to evaluate its cost-effectiveness

have been undertaken. The largest have been the QUARTS

Barriers to the implementation of radiotherapy

There are numerous barriers to the effective

implementation of radiotherapy services. In addition to the

of qualified personnel including radiation oncologists,

barrier. It is difficult to ascertain which comes first, the lack

of investment in equipment leading to shortages of trained

personnel, as there is little incentive to train if radiotherapy

facilities and therefore jobs are not available, or the lack of

trained personnel which limits the decision to invest in the

construction of and the equipment for a new radiotherapy

department. The concept of the "brain drain" is often given

as the cause of personnel shortages but a lack of investment

in jobs may indeed be a stronger driver of shortages.

Although human resources pose a problem, novel ideas on

how to enhance health professionals' education are

Geography presents another barrier to accessing

radiotherapy. A need for a sound geographic distribution of

equipment is highlighted as distance to the cancer facility is a

barrier. In most countries, even high-income countries,

radiotherapy is available in densely populated areas or urban

centres with limited access in rural or sparsely populated

A number of perceptions limit the investment in