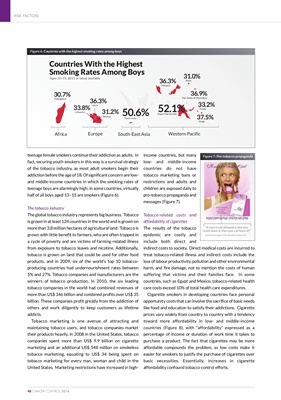 Tobacco Control (WHO FCTC) is a global public health treaty

adopted by the World Health Assembly in 2003. At the time

of the first printing of The Tobacco Atlas, the FCTC was a year

, making the FCTC one of the most quickly ratified

treaties in history. Towards the goal of assisting countries

with implementing tobacco control policies, a set of broad

measures was introduced under the name MPOWER

from tobacco smoke, Offer help to quit tobacco use, Warn

about the dangers of tobacco, Enforce bans on tobacco

advertising, promotion and sponsorship, and Raise taxes on

With these goals in mind, The Tobacco Atlas suggests

‰ All countries that have not done so should sign and ratify

the WHO FCTC ensuring a structured support system for

‰ The next round of Millennium Development Goals to be

established by the UN in 2015 should include tobacco

‰ Tobacco issues should be incorporated into national

‰ Increased government funding for research and

surveillance is needed, ideally derived from a tax on

tobacco products. This is most crucial in developing

countries where tobacco use is high and/or increasing.

particularly in the case of licensing nicotine as an

‰ Excise taxes on tobacco should be at least 70% of the

retail price, as high taxes have been proven a deterrent to

tobacco use. "Duty-free" tobacco should be prohibited.

‰ Health care professionals have a responsibility to model

tobacco-free behaviour. Such behaviour, along with the

smoke-free policies and curricula of health-education

institutions, can work to reduce societal tobacco use.

‰ Strengthened support for the difficult act of quitting

smoking is required and the inclusion of monetary

incentives and lower health-insurance rates is

‰ Anti-tobacco messages and campaigns that have proven

effective in some areas should be replicated in other

parts of the world.

‰ Continued research and monitoring on novel tobacco and

nicotine products is needed in order to ensure the public

is well-informed about the relative health risks, both

those inherent to these products as well as in comparison

‰ Where tobacco farming is widespread, assistance should

In China, cigarettes have become

much more af ordable over the

of the average annual per capita

income was needed to buy 100

packs of the cheapest cigarettes.

In 2010 this number dropped to

Figure 8: Changes in affordability of cigarettes