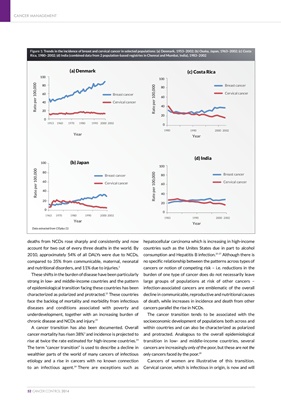 progresses, a disease that kills women living in poverty. The

burden of breast cancer, by contrast, falls on women at all

levels of income, yet the probability of death is greater if the

woman is poor.20 As is evident from Figure 2, while the

incidence of breast cancer is several times higher in countries

of high income, mortality rates are similar indicating that

fatality is much higher in low- and middle-income countries.

Further, and particularly due to the relatively young age

distributions of populations, a large group of young women

face these cancers in low- and middle-income countries.

Although the incidence of breast cancer typically increases

with age, as a fraction of all women within this age group, it is

twice as common in women under age 50 - often the primary

custodians and caregivers of families including young

American countries to the United States and Canada found

similar results.29 This generates a particular set of challenges

related to maternal health and reproduction.

We use data from several sources - global cross-sectional

- to demonstrate the cancer

transition for women by comparing mortality rates for

The global cross-sectional data are age-adjusted (to the

trend data for specific countries are age-adjusted (to the

published by the Ministry of Health. We use the sub-national

data aggregates over a wide range of municipalities,

including both larger urban centres where access to health

and other services tends to be better and levels of poverty

less severe, and smaller, poorer municipalities with much

These data are aggregated according to the index of

deprivation (marginalization) developed and maintained by

entities) and municipalities according to the proportion of

the population with low levels of education, residence in

or characterized by overcrowding or earth flooring), low

Figure 2: Incidence of, and mortality from, breast and cervical cancers by World region, 2008