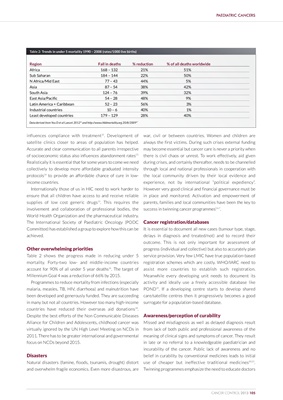 Region Fall in deaths % reduction % of all deaths worldwide

influences compliance with treatment12. Development of war, civil or between countries. Women and children are

satellite clinics closer to areas of population has helped. always the first victims. During such crises external funding

of socioeconomic status also influences abandonment rates there is civil chaos or unrest. To work effectively, aid given

Realistically it is essential that for some years to come we need during crises, and certainly thereafter, needs to be channelled

ensure that all children have access to and receive reliable in place and monitored. Activation and empowerment of

supplies of low cost generic drugs15. This requires the parents, families and local communities have been the key to

involvement and collaboration of professional bodies, the success in twinning cancer programmes5,6,7.

Committee) has established a group to explore how this can be It is essential to document all new cases (tumour type, stage,

achieved. delays in diagnosis and treated/not) and to record their

outcome. This is not only important for assessment of

Table 2 shows the progress made in reducing under 5 service provision. Very few LMIC have true population-based

account for 90% of all under 5 year deaths16. The target of assist more countries to establish such registration.

Millennium Goal 4 was a reduction of 66% by 2015. Meanwhile every developing unit needs to document its

been developed and generously funded. They are succeeding care/satellite centres then it progressively becomes a good

in many but not all countries. However too many high-income surrogate for a population-based database.

Alliance for Children and Adolescents, childhood cancer was Missed and misdiagnosis as well as delayed diagnosis result

2011. There has to be greater international and governmental meaning of clinical signs and symptoms of cancer. They result

focus on NCDs beyond 2015. in late or no referral to a knowledgeable paediatrician and

incurability of the cancer. Public lack of awareness and no

Disasters belief in curability by conventional medicines leads to initial

and overwhelm fragile economics. Even more disastrous, are Twinning programmes emphasize the need to educate doctors