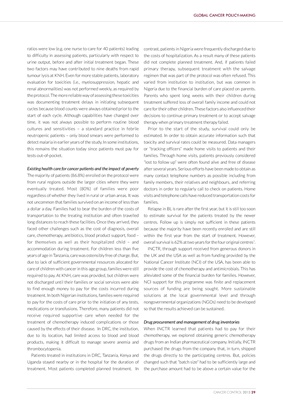 ratios were low (e.g. one nurse to care for 40 patients) leading contrast, patients in Nigeria were frequently discharged due to

to difficulty in assessing patients, particularly with respect to the costs of hospitalization. As a result many of these patients

urine output, before and after initial treatment began. These did not complete planned treatment. And, if patients failed

two factors may have contributed to nine deaths from rapid primary therapy, subsequent treatment with the salvage

tumour lysis at KNH. Even for more stable patients, laboratory regimen that was part of the protocol was often refused. This

evaluation for toxicities (i.e., myelosuppression, hepatic and varied from institution to institution, but was common in

renal abnormalities) was not performed weekly, as required by Nigeria due to the financial burden of care placed on parents.

the protocol. The more reliable way of assessing these toxicities Parents who spent long weeks with their children during

cycles because blood counts were always obtained prior to the care for their other children. These factors also influenced their

start of each cycle. Although capabilities have changed over decisions to continue primary treatment or to accept salvage

time, it was not always possible to perform routine blood therapy when primary treatment therapy failed.

cultures and sensitivities – a standard practice in febrile Prior to the start of the study, survival could only be

neutropenic patients – only blood smears were performed to estimated. In order to obtain accurate information such that

detect malaria in earlier years of the study. In some institutions, toxicity and survival rates could be measured. Data managers

Existing health care for cancer patients and the impact of poverty after several years. Serious efforts have been made to obtain as

The majority of patients (86.8%) enrolled on the protocol were many contact telephone numbers as possible including from

from rural regions outside the larger cities where they were family members, their relatives and neighbours, and referring

eventually treated. Most (80%) of families were poor doctors in order to regularly call to check on patients. Home

regardless of whether they lived in rural or urban areas. It was visits and telephone calls have reduced transportation costs for

not uncommon that families survived on an income of less than families.

a dollar a day. Families had to bear the burden of the costs of Relapse in BL is rare after the first year, but it is still too soon

long distances to reach these facilities. Once they arrived, they centres. Follow up is simply not sufficient in these patients

faced other challenges such as the cost of diagnosis, overall because the majority have been recently enrolled and are still

care, chemotherapy, antibiotics, blood product support, food – within the first year from the start of treatment. However,

for themselves as well as their hospitalized child – and overall survival is 62% at two years for the four original centres1.

accommodation during treatment. For children less than five INCTR, through support received from generous donors in

years of age in Tanzania, care was ostensibly free of charge. But, the UK and the USA as well as from funding provided by the

due to lack of sufficient governmental resources allocated for National Cancer Institute (NCI) of the USA, has been able to

care of children with cancer in this age group, families were still provide the cost of chemotherapy and antimicrobials. This has

required to pay. At KNH, care was provided, but children were alleviated some of the financial burden for families. However,

to find enough money to pay for the costs incurred during sources of funding are being sought. More sustainable

treatment. In both Nigerian institutions, families were required solutions at the local governmental level and through

to pay for the costs of care prior to the initiation of any tests, nongovernmental organizations (NGOs) need to be developed

medications or transfusions. Therefore, many patients did not so that the results achieved can be sustained.

receive required supportive care when needed for the

caused by the effects of their disease. In DRC, the institution, When INCTR learned that patients had to pay for their

due to its location, had limited access to blood and blood chemotherapy, we explored obtaining generic chemotherapy

thrombocytopenia. purchased the drugs from the company that, in turn, shipped

Patients treated in institutions in DRC, Tanzania, Kenya and the drugs directly to the participating centres. But, policies

treatment. Most patients completed planned treatment. In the purchase amount had to be above a certain value for the