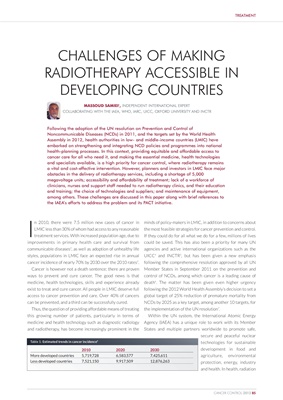 COLLABORATING WITH THE IAEA, WHO, IARC, UICC, OXFORD UNIVERSITY AND INCTR

Noncommunicable Diseases (NCDs) in 2011, and the targets set by the World Health

Assembly in 2012, health authorities in low- and middle-income countries (LMIC) have

embarked on strengthening and integrating NCD policies and programmes into national

health-planning processes. In this context, providing equitable and affordable access to

cancer care for all who need it, and making the essential medicine, health technologies

and specialists available, is a high priority for cancer control, where radiotherapy remains

a vital and cost-effective intervention. However, planners and investors in LMIC face major

obstacles in the delivery of radiotherapy services, including a shortage of 5,000

megavoltage units; accessibility and affordability of treatment; lack of a workforce of

clinicians, nurses and support staff needed to run radiotherapy clinics, and their education

and training; the choice of technologies and suppliers; and maintenance of equipment,

among others. These challenges are discussed in this paper along with brief references to

the IAEA’s efforts to address the problem and its PACT initiative.

n 2010, there were 7.5 million new cases of cancer in minds of policy-makers in LMIC, in addition to concerns about

LMIC less than 30% of whom had access to any reasonable the most feasible strategies for cancer prevention and control.

treatment services. With increased population age, due to If they could do for all what we do for a few, millions of lives

improvements in primary health care and survival from could be saved. This has also been a priority for many UN

communicable diseases2, as well as adoption of unhealthy life agencies and active international organizations such as the

styles, populations in LMIC face an expected rise in annual UICC4 and INCTR5, but has been given a new emphasis

cancer incidence of nearly 70% by 2030 over the 2010 rates . following the comprehensive resolution approved by all UN

Cancer is however not a death sentence; there are proven Member States in September 2011 on the prevention and

ways to prevent and cure cancer. The good news is that control of NCDs, among which cancer is a leading cause of

medicine, health technologies, skills and experience already death6. The matter has been given even higher urgency

exist to treat and cure cancer. All people in LMIC deserve full following the 2012 World Health Assembly’s decision to set a

access to cancer prevention and care. Over 40% of cancers global target of 25% reduction of premature mortality from

can be prevented, and a third can be successfully cured. NCDs by 2025 as a key target, among another 10 targets, for

Thus, the question of providing affordable means of treating the implementation of the UN resolution7.

this growing number of patients, particularly in terms of Within the UN system, the International Atomic Energy

and radiotherapy, has become increasingly prominent in the States and multiple partners worldwide to promote safe,

and health. In health, radiation