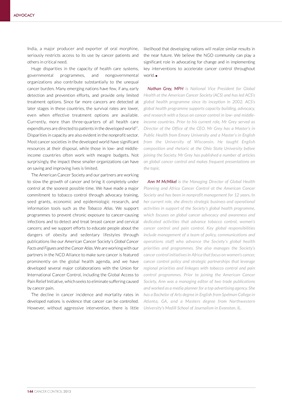 India, a major producer and exporter of oral morphine, likelihood that developing nations will realize similar results in

seriously restricts access to its use by cancer patients and the near future. We believe the NGO community can play a

others in critical need. significant role in advocating for change and in implementing

Huge disparities in the capacity of health care systems, key interventions to accelerate cancer control throughout

cancer burden. Many emerging nations have few, if any, early Nathan Grey, MPH is National Vice President for Global

detection and prevention efforts, and provide only limited Health at the American Cancer Society (ACS) and has led ACS’s

treatment options. Since far more cancers are detected at global health programme since its inception in 2002. ACS’s

even when effective treatment options are available. and research with a focus on cancer control in low- and middle-

Currently, more than three-quarters of all health care income countries. Prior to his current role, Mr Grey served as

expenditures are directed to patients in the developed world . Director of the Office of the CEO. Mr Grey has a Master’s in

Disparities in capacity are also evident in the nonprofit sector. Public Health from Emory University and a Master’s in English

Most cancer societies in the developed world have significant from the University of Wisconsin. He taught English

resources at their disposal, while those in low- and middle- composition and rhetoric at the Ohio State University before

income countries often work with meagre budgets. Not joining the Society. Mr Grey has published a number of articles

surprisingly, the impact these smaller organizations can have on global cancer control and makes frequent presentations on

on saving and improving lives is limited. the topic.

The American Cancer Society and our partners are working

control at the soonest possible time. We have made a major Planning and Africa Cancer Control at the American Cancer

commitment to tobacco control through advocacy training, Society and has been in nonprofit management for 12 years. In

seed grants, economic and epidemiologic research, and her current role, she directs strategic business and operational

information tools such as the Tobacco Atlas. We support activities in support of the Society's global health programme,

cancers; and we support efforts to educate people about the cancer control and pain control. Key global responsibilities

dangers of obesity and sedentary lifestyles through include management of a team of policy, communications and

Facts and Figures and the Cancer Atlas. We are working with our priorities and programmes. She also manages the Society’s

partners in the NCD Alliance to make sure cancer is featured cancer control initiatives in Africa that focus on women’s cancer,

prominently on the global health agenda, and we have cancer control policy and strategic partnerships that leverage

International Cancer Control, including the Global Access to control programmes. Prior to joining the American Cancer

by cancer pain. and worked as a media planner for a top advertising agency. She

developed nations is evidence that cancer can be controlled. Atlanta, GA, and a Masters degree from Northwestern

However, without aggressive intervention, there is little University's Medill School of Journalism in Evanston, IL.