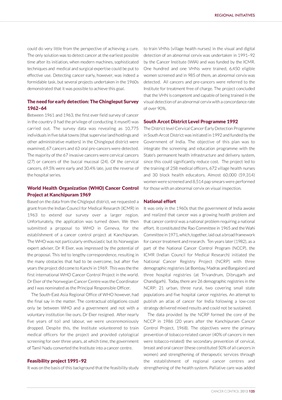 could do very little from the perspective of achieving a cure. to train VHNs (village health nurses) in the visual and digital

time after its initiation, when modern machines, sophisticated by the Cancer Institute (WIA) and was funded by the ICMR.

techniques and medical and surgical expertise could be put to One hundred and one VHNs were trained, 6,450 eligible

effective use. Detecting cancer early, however, was indeed a women screened and in 985 of them, an abnormal cervix was

formidable task, but several projects undertaken in the 1960s detected. All cancers and pre-cancers were referred to the

demonstrated that it was possible to achieve this goal. Institute for treatment free of charge. The project concluded

The need for early detection: The Chingleput Survey visual detection of an abnormal cervix with a concordance rate

carried out. The survey data was revealing as 10,775 The District level Cervical Cancer Early Detection Programme

other administrative matters) in the Chingleput district were Government of India. The objective of this plan was to

examined, 67 cancers and 63 oral pre-cancers were detected. integrate the screening and education programme with the

The majority of the 67 invasive cancers were cervical cancers State’s permanent health infrastructure and delivery system,

(27) or cancers of the buccal mucosal (24). Of the cervical since this could significantly reduce cost. The project led to

women were screened and 8,514 pap smears were performed

World Health Organization (WHO) Cancer Control for those with an abnormal cervix on visual inspection.

Based on the data from the Chigleput district, we requested a National effort

1963 to extend our survey over a larger region. and realized that cancer was a growing health problem and

Unfortunately, the application was turned down. We then that cancer control was a national problem requiring a national

submitted a proposal to WHO in Geneva, for the effort. It constituted the Rao Committee in 1965 and the Wahi

establishment of a cancer control project at Kanchipuram. Committee in 1971, which, together, laid out a broad framework

The WHO was not particularly enthusiastic but its Norwegian for cancer treatment and research. Ten years later (1982), as a

expert adviser, Dr R Eker, was impressed by the potential of part of the National Cancer Control Program (NCCP), the

the proposal. This led to lengthy correspondence, resulting in ICMR (Indian Council for Medical Research) initiated the

the many obstacles that had to be overcome, but after five National Cancer Registry Project (NCRP) with three

years the project did come to Kanchi in 1969. This was the the demographic registries (at Bombay, Madras and Bangalore) and

first international WHO Cancer Control Project in the world. three hospital registries (at Trivandrum, Dibrugarh and

Dr Eker of the Norwegian Cancer Centre was the Coordinator Chandigarh). Today, there are 26 demographic registries in the

The South-East Asia Regional Office of WHO however, had populations and five hospital cancer registries. An attempt to

the final say in the matter. The contractual obligations could publish an atlas of cancer for India following a low-cost

only be between WHO and a government and not with a strategy delivered mixed results and could not be sustained.

voluntary institution like ours. Dr Eker resigned. After nearly The data provided by the NCRP formed the core of the

five years of toil and labour, we were unceremoniously NCCP in 1986 (20 years after the Kanchipuram Cancer

dropped. Despite this, the Institute volunteered to train Control Project, 1968). The objectives were the primary

screening for over three years, at which time, the government were tobacco-related) the secondary prevention of cervical,

of Tamil Nadu converted the Institute into a cancer centre. breast and oral cancer (these constituted 50% of all cancers in

women) and strengthening of therapeutic services through

Feasibility project 1991–92 the establishment of regional cancer centres and

It was on the basis of this background that the feasibility study strengthening of the health system. Palliative care was added