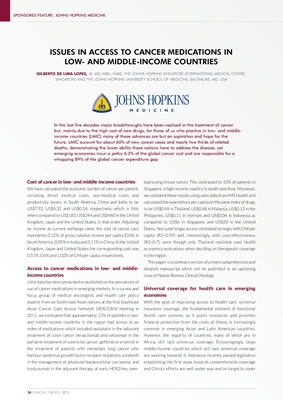 but, mainly due to the high cost of new drugs, for those of us who practice in low- and middle-

future. LMIC account for about 60% of new cancer cases and nearly two thirds of related

deaths, demonstrating the lower ability these nations have to address the disease; yet

emerging economies incur a paltry 6.2% of the global cancer cost and are responsible for a

Cost of cancer in low- and middle-income countries expressing breast cancer. This contrasted to 55% of patients in

We have calculated the economic burden of cancer per patient, Singapore, a high-income country in south-east Asia. Moreover,

including direct medical costs, non-medical costs and we validated these results using sales data from IMS Health and

productivity losses, in South America, China and India to be calculated the expenditure per capita on the same index of drugs

Kingdom, Japan and the United States, in that order. Adjusting compared to US$6 in Singapore and US$20 in the United

by income at current exchange rates, the cost of cancer care States. Not surprisingly, access correlated strongly with GNI per

represents 0.12% of gross national income per capita (GNI) in capita (R2=0.99) and, interestingly, with cost-effectiveness

Kingdom, Japan and United States the corresponding cost was economics evaluations when deciding on therapeutic coverage

This paper is a summary version of a more comprehensive and

Little data has been presented or published on the prevalence of

use of cancer medications in emerging markets. In a survey and Universal coverage for health care in emerging

experts from six South-east Asian nations at the first Southeast With the goal of improving access to health care, universal

2011, we estimated that approximately 15% of patients in low- health care systems as it pools resources and provides

and middle-income countries in the region had access to an financial protection from the costs of illness, is increasingly

index of medications which included oxaliplatin in the adjuvant common in emerging Asian and Latin American countries.

treatment of colon cancer, bevacizumab and cetuximab in the However, the majority of countries, many of which are in

in the management of advanced hepatocellular carcinoma; and establishing the first steps towards comprehensive coverage