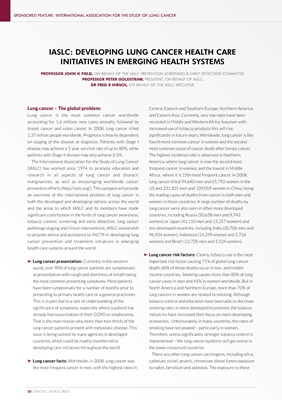 SPONSORED FEATURE: INTERNATIONAL ASSOCIATION FOR THE STUDY OF LUNG CANCER

DR FRED R HIRSCH, ON BEHALF OF THE IASLC EXECUTIVE

Lung cancer is the most common cancer worldwide and Eastern Asia. Currently, very low rates have been

accounting for 1.6 millions new cases annually, followed by recorded in Middle and Western Africa, however with

breast cancer and colon cancer. In 2008, lung cancer killed increased use of tobacco products this will rise

on staging of the disease at diagnosis. Patients with Stage I fourth most common cancer in women and the second

disease may achieve a 5 year survival rate of up to 80%, while most common cause of cancer death after breast cancer.

patients with Stage 4 disease may only achieve 3-5%. The highest incidence rate is observed in Northern

The International Association for the Study of Lung Cancer America, where lung cancer is now the second most

(IASLC) has worked since 1974 to promote education and frequent cancer in women, and the lowest in Middle

research in all aspects of lung cancer and thoracic Africa, where it is 15th most frequent cancer. In 2008,

malignancies, as well as encouraging worldwide cancer lung cancer killed 94,640 men and 65,792 women in the

both the developed and developing nations across the world women in these countries. A large number of deaths by

significant contribution in the fields of lung cancer awareness, countries, including Russia (50,658 men and 8,743

cancer prevention and treatment initiatives in emerging women) and Brazil (12,728 men and 5,524 women).

health care systems around the world.

‰ Lung cancer risk factors: Clearly, tobacco use is the most

world, over 90% of lung cancer patients are symptomatic death; 60% of these deaths occur in low- and middle-

at presentation with cough and shortness of breath being income countries. Smoking causes more than 80% of lung

the most common presenting symptoms. Most patients cancer cases in men and 45% in women worldwide. But in

have been symptomatic for a number of months prior to North America and Northern Europe, more than 70% of

presenting to primary health care or a general practioner. lung cancers in women are related to smoking. Although

significance of symptoms, especially where a patient has smoking rates in more developed economies, the tobacco

already had exacerbation of their COPD or emphysema. industries have increased their focus on more developing

That is the main reason why more than two-thirds of the economies. Unfortunately, in many countries, the rates of

lung cancer patients present with metastatic disease. This smoking have not peaked – particularly in women.

issue is being tackled by many agencies in developed Therefore, unless significantly stronger tobacco control is

countries, which could be readily transferred to implemented – the lung cancer epidemic will get worse in

developing care initiatives throughout the world. the lower resourced countries.

There are other lung cancer carcinogens, including silica,

the most frequent cancer in men, with the highest rates in to radon, beryllium and asbestos. The exposure to these