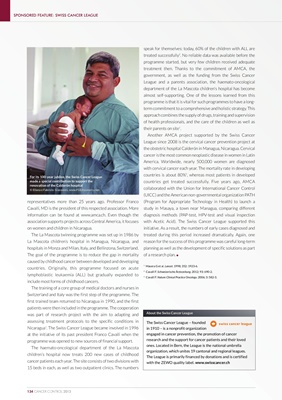 speak for themselves: today, 60% of the children with ALL are

treated successfully2. No reliable data was available before the

treatment then. Thanks to the commitment of AMCA, the

government, as well as the funding from the Swiss Cancer

League and a parents association, the haemato-oncological

department of the La Mascota children's hospital has become

almost self-supporting. One of the lessons learned from this

term commitment to a comprehensive and holistic strategy. This

approach combines the supply of drugs, training and supervision

of health professionals, and the care of the children as well as

their parents on site1.

Another AMCA project supported by the Swiss Cancer

League since 2008 is the cervical cancer prevention project at

cancer is the most common neoplastic disease in women in Latin

with cervical cancer each year. The mortality rate in developing

For its 100-year jubilee, the Swiss Cancer League

countries is about 80%3, whereas most patients in developed

made a special contribution to support the countries get treated successfully. Five years ago, AMCA

renovation of the Calderón hospital

representatives more than 25 years ago. Professor Franco (Program for Appropriate Technology in Health) to launch a

Cavalli, MD is the president of this respected association. More study in Masaya, a town near Managua, comparing different

information can be found at www.amca.ch. Even though the diagnosis methods (PAP-test, HPV-test and visual inspection

on women and children in Nicaragua. initiative. As a result, the numbers of early cases diagnosed and

The La Mascota twinning programme was set up in 1986 by treated during this period increased dramatically. Again, one

La Mascota children’s hospital in Managua, Nicaragua, and reason for the success of this programme was careful long-term

hospitals in Monza and Milan, Italy, and Bellinzona, Switzerland. planning as well as the development of specific solutions as part

The goal of the programme is to reduce the gap in mortality of a research plan. l

caused by childhood cancer between developed and developing

lymphoblastic leukaemia (ALL) but gradually expanded to 3.

include most forms of childhood cancers.

Switzerland and Italy was the first step of the programme. The

first trained team returned to Nicaragua in 1990, and the first

patients were then included in the programme. The cooperation

About the Swiss Cancer League

was part of research project with the aim to adapting and

Nicaragua1. The Swiss Cancer League became involved in 1996 in 1910 – is a nonprofit organization

at the initiative of its past president Franco Cavalli when the engaged in cancer prevention, the promotion of cancer

programme was opened to new sources of financial support. research and the support for cancer patients and their loved

ones. Located in Bern, the League is the national umbrella

The haemato-oncological department of the La Mascota

The League is primarily financed by donations and is certified

cancer patients each year. The site consists of two divisions with with the ZEWO quality label. www.swisscancer.ch

15 beds in each, as well as two outpatient clinics. The numbers