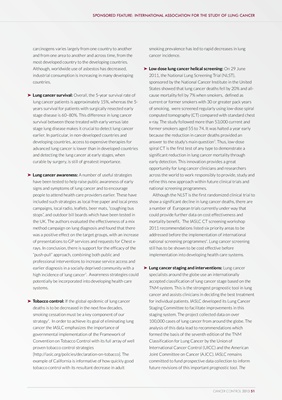 SPONSORED FEATURE: INTERNATIONAL ASSOCIATION FOR THE STUDY OF LUNG CANCER

and from one area to another and across time, from the cancer incidence.

most developed country to the developing countries.

Although, worldwide use of asbestos has decreased, ‰ Low dose lung cancer helical screening: On 29 June

industrial consumption is increasing in many developing 2011, the National Lung Screening Trial (NLST),

countries. sponsored by the National Cancer Institute in the United

States showed that lung cancer deaths fell by 20% and all-

‰ Lung cancer survival: Overall, the 5-year survival rate of cause mortality fell by 7% when smokers, defined as

lung cancer patients is approximately 15%, whereas the 5- current or former smokers with 30 or greater pack years

survival between those treated with early versus late x-ray. The study followed more than 53,000 current and

stage lung disease makes it crucial to detect lung cancer former smokers aged 55 to 74. It was halted a year early

earlier. In particular, in non-developed countries and because the reduction in cancer deaths provided an

and detecting the lung cancer at early stages, when significant reduction in lung cancer mortality through

curable by surgery, is still of greatest importance. early detection. This innovation provides a great

‰ Lung cancer awareness: A number of useful strategies across the world to work responsibly to provide, study and

signs and symptoms of lung cancer and to encourage national screening programmes.

people to attend health care providers earlier. These have Although the NLST is the first randomized clinical trial to

included such strategies as local free paper and local press show a significant decline in lung cancer deaths, there are

stops”, and outdoor bill boards which have been tested in could provide further data on cost effectiveness and

the UK. The authors evaluated the effectiveness of a mix mortality benefit. The IASLC CT screening workshop

was a positive effect on the target groups, with an increase addressed before the implementation of international

rays. In conclusion, there is support for the efficacy of the still has to be shown to be cost effective before

earlier diagnosis in a socially deprived community with a ‰ Lung cancer staging and interventions: Lung cancer

high incidence of lung cancer1. Awareness strategies could specialists around the globe use an internationally

systems. TNM system. This is the strongest prognostic tool in lung

cancer and assists clinicians in deciding the best treatment

deaths is to be decreased in the next few decades, Staging Committee to facilitate improvements in this

smoking cessation must be a key component of our staging system. The project collected data on over

strategy . In order to achieve its goal of eliminating lung 100,000 cases of lung cancer from around the globe. The

tobacco control with its resultant decrease in adult future revisions of this important prognostic tool. The