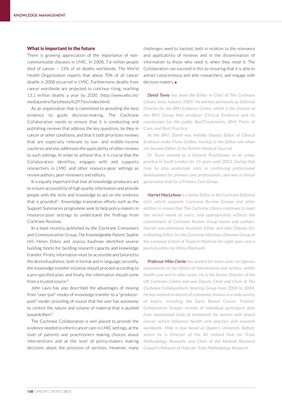 What is important in the future challenges need to tackled, both in relation to the relevance

communicable diseases in LMIC. In 2008, 7.6 million people information to those who need it, when they need it. The

died of cancer – 13% of all deaths worldwide. The World Collaboration can succeed in this by ensuring that it is able to

Health Organization reports that about 70% of all cancer attract conscientious and able researchers, and engage with

deaths in 2008 occurred in LMIC. Furthermore, deaths from decision-makers. l

mediacentre/factsheets/fs297/en/index.html) Library since January 2009. He worked previously as Editorial

As an organization that is committed to providing the best Director for the BMJ Evidence Centre, which is the division of

evidence to guide decision-making, The Cochrane the BMJ Group that produces Clinical Evidence and its

Collaboration needs to ensure that it is conducting and counterpart for the public BestTreatments, BMJ Point of

publishing reviews that address the key questions, be they in Care, and Best Practice.

cancer or other conditions, and that it both prioritizes reviews At the BMJ, David was initially Deputy Editor of Clinical

that are especially relevant to low- and middle-income Evidence under Fiona Godlee, moving to the Editor role when

countries and also addresses the applicability of other reviews she became Editor of the British Medical Journal.

to such settings. In order to achieve this, it is crucial that the Dr Tovey worked as a General Practitioner in an urban

Collaboration identifies, engages with and supports practice in South London for 15 years until 2003. During that

review authors, peer reviewers and editors. development for primary care professionals, and was a clinical

It is equally important that that all knowledge producers act governance lead for a Primary Care Group.

to ensure accessibility of high quality information and provide

that is provided11. Knowledge translation efforts such as the Unit, which supports Cochrane Review Groups and other

resource-poor settings to understand the findings from the varied needs of users, and appropriately reflects the

In a book recently published by the Cochrane Consumers Harriet was previously Assistant Editor, and later Deputy Co-

and Communication Group, The Knowledgeable Patient, Sophie ordinating Editor, for the Cochrane Infectious Diseases Group at

Hill, Helen Dilkes and Jessica Kaufman identified several the Liverpool School of Tropical Medicine for eight years and a

transfer. Firstly, information must be accessible and tailored to

the desired audience, both in format and in language; secondly, Professor Mike Clarke has worked for many years on rigorous

the knowledge transfer initiative should proceed according to assessments of the effects of interventions and actions, within

a pre-specified plan; and finally, the information should come health care and in other areas. He is the former Director of the

from a trusted source12. UK Cochrane Centre and was Deputy Chair and Chair of The

John Lavis has also described the advantages of moving Cochrane Collaboration’s Steering Group from 2000 to 2004.

push" model, providing of course that the user has autonomy of topics, including the Early Breast Cancer Trialists’

towards them . from randomized trials of treatments for women with breast

The Cochrane Collaboration is well placed to provide the cancer, which influence health care practice and research

evidence needed to inform cancer care in LMIC settings, at the worldwide. Mike is now based at Queen’s University Belfast,

interventions and at the level of policy-makers making Methodology Research, and Chair of the Medical Research

decisions about the provision of services. However, many Council’s Network of Hubs for Trials Methodology Research.