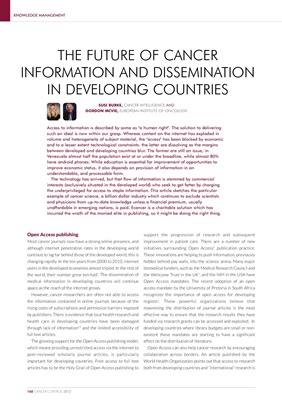 THE FUTURE OF CANCER

Access to information is described by some as "a human right". The solution to delivering

such an ideal is now within our grasp. Whereas content on the internet has exploded in

volume and heterogeneity of subject material, the "access" has been blocked by economic

and to a lesser extent technological constraints. the latter are dissolving as the margins

between developed and developing countries blur. The former are still an issue; in

Venezuela almost half the population exist at or under the breadline, while almost 80%

have android phones. While education is essential for improvement of opportunities to

improve economic status, it also depends on provision of information in an

The technology has arrived, but that flow of information is stemmed by commercial

the underprivileged for access to staple information. This article sketches the particular

example of cancer science, a billion dollar industry which continues to exclude scientists

and physicians from up-to-date knowledge unless a financial premium, usually

unaffordable in emerging nations, is paid. Ecancer is a charitable solution which has

incurred the wrath of the monied elite in publishing, so it might be doing the right thing.

Open Access publishing support the progression of research and subsequent

Most cancer journals now have a strong online presence, and improvement in patient care. There are a number of new

continue to lag far behind those of the developed world, this is These innovations are helping to push information, previously

changing rapidly. In the ten years from 2000 to 2010, internet hidden behind pay walls, into the science arena. Many major

users in the developed economies almost tripled. In the rest of biomedical funders, such as the Medical Research Council and

the world, their number grew ten-fold . The dissemination of the Wellcome Trust in the UK5, and the NIH in the USA have

medical information in developing countries will continue Open Access mandates. The recent adoption of an open

apace as the reach of the internet grows. access mandate by the University of Pretoria in South Africa

However, cancer researchers are often not able to access recognizes the importance of open access for developing

the information contained in online journals because of the regions6. These powerful organizations believe that

by publishers. There is evidence that local health research and effective way to ensure that the research results they have

health care in developing countries have been damaged funded via research grants can be accessed and exploited. In

full text articles. existent these mandates are starting to have a significant

The growing support for the Open Access publishing model, effect on the distribution of literature.

peer-reviewed scholarly journal articles, is particularly collaboration across borders. An article published by the