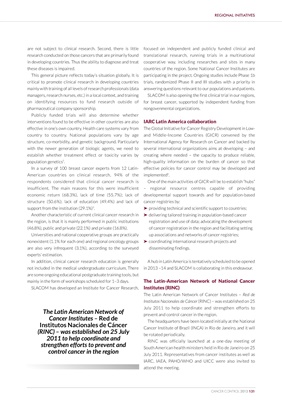 are not subject to clinical research. Second, there is little focused on independent and publicly funded clinical and

research conducted on those cancers that are primarily found translational research, running trials in a multinational

in developing countries. Thus the ability to diagnose and treat cooperative way, including researches and sites in many

these diseases is impaired. countries of the region. Some National Cancer Institutes are

This general picture reflects today’s situation globally. It is participating in the project. Ongoing studies include Phase 1b

critical to promote clinical research in developing countries trials, randomized Phase II and III studies with a priority in

mainly with training of all levels of research professionals (data answering questions relevant to our populations and patients.

managers, research nurses, etc.) in a local context, and training SLACOM is also opening the first clinical trial in our regions,

on identifying resources to fund research outside of for breast cancer, supported by independent funding from

effective in one’s own country. Health care systems vary from The Global Initiative for Cancer Registry Development in Low-

country to country. National populations vary by age and Middle-Income Countries (GICR) convened by the

structure, co-morbidity, and genetic background. Particularly International Agency for Research on Cancer and backed by

with the newer generation of biologic agents, we need to several international organizations aims at developing – and

establish whether treatment effect or toxicity varies by creating where needed – the capacity to produce reliable,

population genetics2. high-quality information on the burden of cancer so that

American countries on clinical research, 94% of the implemented4.

insufficient. The main reasons for this were insufficient – regional resource centres capable of providing

economic return (68.3%), lack of time (55.7%); lack of developmental support towards and for population-based

the region, is that it is mainly performed in public institutions registration and use of data; advocating the development

Universities and national cooperative groups are practically up associations and networks of cancer registries;

nonexistent (1.1% for each one) and regional oncology groups ‰ coordinating international research projects and

are also very infrequent (3.1%), according to the surveyed disseminating findings.

In addition, clinical cancer research education is generally A hub in Latin America is tentatively scheduled to be opened

not included in the medical undergraduate curriculum, There in 2013 –14 and SLACOM is collaborating in this endeavour.

are some ongoing educational postgraduate training tools, but

mainly in the form of workshops scheduled for 1–3 days. The Latin-American Network of National Cancer

SLACOM has developed an Institute for Cancer Research, Institutes (RINC)

July 2011 to help coordinate and strengthen efforts to

The Latin American Network of prevent and control cancer in the region.

Institutos Nacionales de Cáncer Cancer Institute of Brazil (INCA) in Rio de Janeiro, and it will

(RINC) – was established on 25 July be rotated periodically.

control cancer in the region July 2011. Representatives from cancer institutes as well as

IARC, IAEA, PAHO/WHO and UICC were also invited to