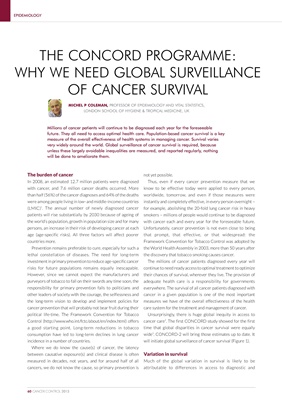 WHY WE NEED GLOBAL SURVEILLANCE

future. They all need to access optimal health care. Population-based cancer survival is a key

measure of the overall effectiveness of health systems in managing cancer. Survival varies

very widely around the world. Global surveillance of cancer survival is required, because

unless these largely avoidable inequalities are measured, and reported regularly, nothing

will be done to ameliorate them.

The burden of cancer not yet possible.

In 2008, an estimated 12.7 million patients were diagnosed Thus, even if every cancer prevention measure that we

with cancer, and 7.6 million cancer deaths occurred. More know to be effective today were applied to every person,

than half (56%) of the cancer diagnoses and 64% of the deaths worldwide, tomorrow, and even if those measures were

were among people living in low- and middle-income countries instantly and completely effective, in every person overnight –

the world’s population, growth in population size and for many with cancer each and every year for the foreseeable future.

persons, an increase in their risk of developing cancer at each Unfortunately, cancer prevention is not even close to being

age (age-specific risks). All three factors will affect poorer that prompt, that effective, or that widespread: the

countries more. Framework Convention for Tobacco Control was adopted by

Prevention remains preferable to cure, especially for such a the World Health Assembly in 2003, more than 50 years after

lethal constellation of diseases. The need for long-term the discovery that tobacco smoking causes cancer.

However, since we cannot expect the manufacturers and their chances of survival, wherever they live. The provision of

purveyors of tobacco to fall on their swords any time soon, the adequate health care is a responsibility for governments

responsibility for primary prevention falls to politicians and everywhere. The survival of all cancer patients diagnosed with

other leaders of society with the courage, the selflessness and cancer in a given population is one of the most important

cancer prevention that will probably not bear fruit during their care system for the treatment and management of cancer.

political life-time. The Framework Convention for Tobacco Unsurprisingly, there is huge global inequity in access to

consumption have led to long-term declines in lung cancer wide3. CONCORD-2 will bring those estimates up to date. It

incidence in a number of countries. will initiate global surveillance of cancer survival (Figure 1).

Where we do know the cause(s) of cancer, the latency

measured in decades, not years, and for around half of all Much of the global variation in survival is likely to be

cancers, we do not know the cause, so primary prevention is attributable to differences in access to diagnostic and