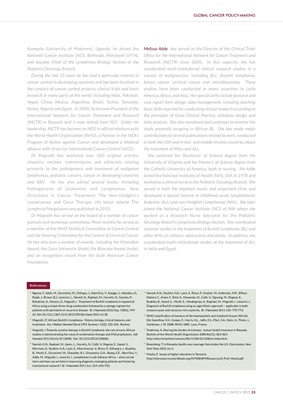 Kampala (University of Makerere), Uganda, he joined the Melissa Adde has served as the Director of the Clinical Trials

and became Chief of the Lymphoma Biology Section of the Research (INCTR) since 2000. In this capacity, she has

During the last 35 years he has had a particular interest in variety of malignancies, including ALL, Burkitt lymphoma,

cancer control in developing countries and has been involved in breast cancer, cervical cancer and retinoblastoma. These

the conduct of cancer control projects, clinical trials and basic studies have been conducted in many countries in Latin

research in many parts of the world, including India, Pakistan, America, Africa, and Asia. Her special skills include protocol and

Kenya, Nigeria and Egypt. In 2000, he became President of the basic skills required for conducting clinical research according to

International Network for Cancer Treatment and Research the principles of Good Clinical Practice, database design and

(INCTR) in Brussels and is now retired from NCI. Under his data analysis. She also monitored and continues to monitor the

leadership, INCTR has become an NGO in official relations with study presently on-going in African BL. She has made major

the World Health Organization (WHO), a Partner in the IAEA’s contributions to several publications related to work, conducted

alliance with Union for International Cancer Control (UICC). the treatment of NHLs and ALL.

Dr Magrath has authored over 360 original articles, She achieved her Bachelors’ of Science degree from the

chapters, reviews, commentaries and editorials relating University of Viriginia and her Masters’ of Science degree from

primarily to the pathogenesis and treatment of malignant the Catholic University of America, both in nursing. Ms Adde

and EBV. He has also edited several books, including worked as a clinical nurse in the Pediatric Oncology Branch. She

Pathogenesis of Leukemias and Lymphomas; New served in both the inpatient wards and outpatient clinic and

Lymphomas; and Gene Therapy. His latest volume The leukemia (ALL) and non-Hodgkin’s lymphomas (NHL). She later

Lymphoid Neoplasms was published in 2010. joined the National Cancer Institute (NCI) of NIH where she

journals and numerous committees. Most recently he served as Oncology Branch’s Lymphoma Biology Section. She coordinated

and the Steering Committee for the Control of Cervical Cancer. other NHLs in children, adolescents and adults. In addition, she

He has also won a number of awards, including the Khanolkar coordinated multi-institutional studies of the treatment of ALL

Award, the Cairo University Shield, the Bhoruka Award (India), in India and Egypt.

and an recognition award from the Arab American Cancer

WHO classification of tumours of the haemopoietic and lymphoid tissues (4th ed).

Magrath, I. Towards curative therapy in Burkitt lymphoma: the role of early African Twahirwa, A. Sharing the burden of sickness: mutual health insurance in Rwanda.

studies in demonstrating the value of combination therapy and CNS prophylaxis. Adv Bulletin of the World Health Organization 2008 86(11); 823-824.

Adde, M., Magrath, I., Leoncini, L. Lymphomas in sub-Saharan Africa – what can we http://siteresources.worldbank.org/INTWBISFP/Resources/0_Prof_Msolla.pdf

learn and how can we help in improving diagnosis, managing patients and fostering