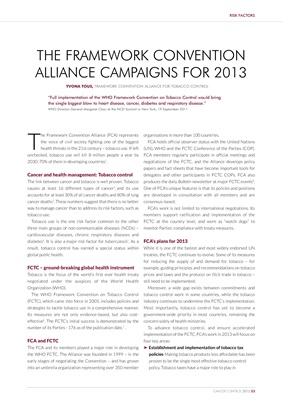 WHO Director-General Margaret Chan at the NCD Summit in New York, 19 September 2011

health threats in the 21st century – tobacco use. If left (UN), WHO and the FCTC Conference of the Parties (COP).

unchecked, tobacco use will kill 8 million people a year by FCA members regularly participate in official meetings and

2030; 70% of them in developing countries . negotiations of the FCTC, and the Alliance develops policy

papers and fact sheets that have become important tools for

The link between cancer and tobacco is well proven. Tobacco produces the daily Bulletin newsletter at major FCTC events8.

causes at least 16 different types of cancer2, and its use One of FCA’s unique features is that its policies and positions

cancer deaths . These numbers suggest that there is no better consensus-based.

way to manage cancer than to address its risk factors, such as FCA’s work is not limited to international negotiations. Its

tobacco use. members support ratification and implementation of the

Tobacco use is the one risk factor common to the other FCTC at the country level, and work as “watch dogs” to

diabetes4. It is also a major risk factor for tuberculosis5. As a FCA’s plans for 2013

result, tobacco control has earned a special status within While it is one of the fastest and most widely endorsed UN

global public health. treaties, the FCTC continues to evolve. Some of its measures

for reducing the supply of and demand for tobacco – for

negotiated under the auspices of the World Health still need to be implemented.

Organization (WHO). Moreover, a wide gap exists between commitments and

The WHO Framework Convention on Tobacco Control tobacco control work in some countries, while the tobacco

(FCTC), which came into force in 2005, includes policies and industry continues to undermine the FCTC’s implementation.

strategies to tackle tobacco use in a comprehensive manner. Most importantly, tobacco control has yet to become a

Its measures are not only evidence-based, but also cost- government-wide priority in most countries, remaining the

effective . The FCTC’s initial success is demonstrated by the concern solely of health ministries.

number of its Parties - 176 as of the publication date.7 . To advance tobacco control, and ensure accelerated

implementation of the FCTC, FCA’s work in 2013 will focus on

the WHO FCTC. The Alliance was founded in 1999 – in the policies Making tobacco products less affordable has been

into an umbrella organization representing over 350 member policy. Tobacco taxes have a major role to play in