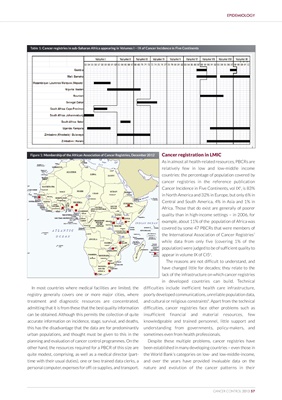 As in almost all health-related resources, PBCRs are

countries: the percentage of population covered by

cancer registries in the reference publication

Central and South America, 4% in Asia and 1% in

Africa. Those that do exist are generally of poorer

quality than in high-income settings – in 2006, for

example, about 11% of the population of Africa was

covered by some 47 PBCRs that were members of

the International Association of Cancer Registries7

while data from only five (covering 1% of the

population) were judged to be of sufficient quality to

appear in volume IX of CI56.

The reasons are not difficult to understand, and

have changed little for decades; they relate to the

lack of the infrastructure on which cancer registries

in developed countries can build. Technical

In most countries where medical facilities are limited, the difficulties include inefficient health care infrastructure,

treatment and diagnostic resources are concentrated, and cultural or religious constraints8. Apart from the technical

admitting that it is from these that the best quality information difficulties, cancer registries face other problems such as

can be obtained. Although this permits the collection of quite insufficient financial and material resources, few

this has the disadvantage that the data are for predominantly understanding from governments, policy-makers, and

urban populations, and thought must be given to this in the sometimes even from health professionals.

planning and evaluation of cancer control programmes. On the Despite these multiple problems, cancer registries have

other hand, the resources required for a PBCR of this size are been established in many developing countries – even those in

quite modest, comprising, as well as a medical director (part- the World Bank’s categories on low- and low-middle-income,

time with their usual duties), one or two trained data clerks, a and over the years have provided invaluable data on the

personal computer, expenses for offi ce supplies, and transport. nature and evolution of the cancer patterns in their