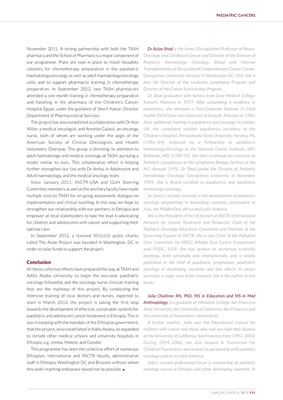 November 2011. A strong partnership with both the TASH Dr Aziza Shad is the Amey Distinguished Professor of Neuro-

our programme. Plans are now in place to install biosafety Pediatric Hematology Oncology, Blood and Marrow

cabinets for chemotherapy preparation in the paediatric Transplantation at the Lombardi Comprehensive Cancer Center,

and handling in the pharmacy of the Children’s Cancer Karachi, Pakistan in 1977. After completing a residency in

Hospital Egypt, under the guidance of Sherif Kamal, Director paediatrics, she obtained a Post-Graduate Diploma in Child

Department of Pharmaceutical Services Health (DCH) from the University of Karachi, Pakistan in 1980.

The project has also established a collaboration with Dr Ken After additional training in paediatrics and oncology in London,

Miller, a medical oncologist, and Annette Galassi, an oncology UK, she completed another paediatrics residency at the

nurse, both of whom are working under the aegis of the Children’s Hospital, Pennsylvania State University, Hershey, PA,

American Society of Clinical Oncologists and Health (1986–89), followed by a Fellowship in paediatric

Volunteers Overseas. This group is directing its attention to Hematology/Oncology at the National Cancer Institute, NIH,

adult haematology and medical oncology at TASH, pursuing a Bethesda, MD, (1989-92). She then continued her research on

model similar to ours. This collaborative effort is helping Pediatric Lymphomas at the Lymphoma Biology Section at the

further strengthen our ties with Dr Amha, in Adolescent and NCI through 1995. Dr Shad joined the Division of Pediatric

Since January 2011, INCTR-USA and GUH Steering 1995. She is Board certified in paediatrics and paediatric

Committee members as well as the ancillary faculty have made hematology oncology.

multiple visits to TASH for on-going assessment, dialogue on Dr Shad is actively involved in the development of paediatric

implementation and clinical teaching. In this way, we hope to oncology programmes in developing countries, particularly in

strengthen our relationship with our partners in Ethiopia and Asia, the Middle East, Africa and Latin America.

for children and adolescents with cancer and supporting their Network for Cancer Treatment and Research), Chair of the

optimal care. Pediatric Oncology Education Committee and Member of the

In September 2012, a licensed 501(c)(3) public charity Governing Council of INCTR. She is also Chair of the Palliative

order to raise funds to support the project. and PODC, SIOP. She has spoken at numerous scientific

meetings, both nationally and internationally, and is widely

Conclusion published in the field of paediatric lymphomas, paediatric

Addis Ababa University to begin the two-year paediatric survivors, a major area of her research. She is the author of two

that are the mainstay of this project. By conducting the

intensive training of local doctors and nurses, expected to Julia Challinor RN, PhD, MS in Education and MS in Med

start in March 2013, the project is taking the first step Anthropology, is a graduate of Wheelock College, San Francisco

towards the development of effective, sustainable systems for State University, the University of California, San Francisco and

paediatric and adolescent cancer treatment in Ethiopia. This is the University of Amsterdam, Netherlands.

also in keeping with the mandate of the Ethiopian government, A former teacher, Julia was the Educational Liaison for

that the project, once established in Addis Ababa, be expanded children with cancer and those who had survived their disease

to include other medical schools and university hospitals in at the University of California, San Francisco from 1993–2003.

staff in Ethiopia, Washington DC and Brussels without whom Julia’s current professional focus is mentorship of pediatric

this wide-reaching endeavour would not be possible. l oncology nurses in Ethiopia and other developing countries. In