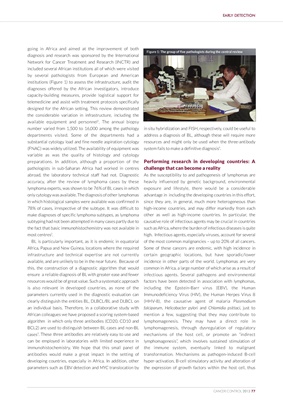 going in Africa and aimed at the improvement of both

Figure 1: The group of five pathologists during the central review

diagnosis and research was sponsored by the International

Network for Cancer Treatment and Research (INCTR) and

included several African institutions all of which were visited

by several pathologists from European and American

institutions (Figure 1) to assess the infrastructure, audit the

designed for the African setting. This review demonstrated

the considerable variation in infrastructure, including the

number varied from 1,500 to 16,000 among the pathology in situ hybridization and FISH, respectively, could be useful to

departments visited. Some of the departments had a address a diagnosis of BL, although these will require more

(FNAC) was widely utilized. The availability of equipment was system fails to make a definitive diagnosis4.

variable as was the quality of histology and cytology

preparations. In addition, although a proportion of the Performing research in developing countries: A

abroad, the laboratory technical staff had not. Diagnostic As the susceptibility to and pathogenesis of lymphomas are

accuracy, after the review of lymphoma cases by these heavily influenced by genetic background, environmental

lymphoma experts, was shown to be 76% of BL cases in which exposure and lifestyle, there would be a considerable

only cytology was available. The diagnosis of other lymphomas advantage in including the developing countries in this effort,

in which histological samples were available was confirmed in since they are, in general, much more heterogeneous than

78% of cases, irrespective of the subtype. It was difficult to high-income countries, and may differ markedly from each

make diagnoses of specific lymphoma subtypes, as lymphoma other as well as high-income countries. In particular, the

the fact that basic immunohistochemistry was not available in such as Africa, where the burden of infectious diseases is quite

BL is particularly important, as it is endemic in equatorial of the most common malignancies – up to 20% of all cancers.

Africa, Papua and New Guinea, locations where the required Some of these cancers are endemic, with high incidence in

infrastructure and technical expertise are not currently certain geographic locations, but have sporadic/lower

available, and are unlikely to be in the near future. Because of incidence in other parts of the world. Lymphomas are very

this, the construction of a diagnostic algorithm that would common in Africa, a large number of which arise as a result of

resources would be of great value. Such a systematic approach factors have been detected in association with lymphomas,

is also relevant in developed countries, as none of the including the Epstein-Barr virus (EBV), the Human

clearly distinguish the entities BL, DLBCL/BL and DLBCL on (HHV-8), the causative agent of malaria Plasmodium

an individual basis. Therefore, in a collaborative study with falciparum, Helicobacter pylori and Chlamidia psittaci, just to

African colleagues we have proposed a scoring system-based mention a few, suggesting that they may contribute to

algorithm in which only three antibodies (CD20, CD10 and lymphomagenesis. They may have a direct role in

BCL2) are used to distinguish between BL cases and non-BL lymphomagenesis, through dysregulation of regulatory

cases . These three antibodies are relatively easy to use and mechanisms of the host cell, or promote an “indirect

can be employed in laboratories with limited experience in lymphomagenesis”, which involves sustained stimulation of

immunohistochemistry. We hope that this small panel of the immune system, eventually linked to malignant

antibodies would make a great impact in the setting of transformation. Mechanisms as pathogen-induced B-cell

developing countries, especially in Africa. In addition, other hyper-activation, B-cell stimulatory activity and alteration of

parameters such as EBV detection and MYC translocation by the expression of growth factors within the host cell, thus