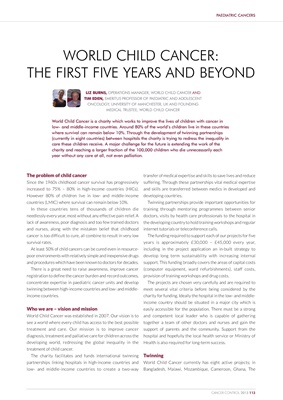 THE FIRST FIVE YEARS AND BEYOND

low- and middle-income countries. Around 80% of the world’s children live in these countries

where survival can remain below 10%. Through the development of twinning partnerships

care these children receive. A major challenge for the future is extending the work of the

charity and reaching a larger fraction of the 100,000 children who die unnecessarily each

year without any care at all, not even palliation.

Since the 1960s childhood cancer survival has progressively suffering. Through these partnerships vital medical expertise

increased to 75% – 80% in high-income countries (HICs). and skills are transferred between medics in developed and

However 80% of children live in low- and middle-income developing countries.

countries (LMIC) where survival can remain below 10%. Twinning partnerships provide important opportunities for

needlessly every year, most without any effective pain relief. A doctors, visits by health care professionals to the hospital in

lack of awareness, poor diagnosis and too few trained doctors the developing country to hold training workshops and regular

and nurses, along with the mistaken belief that childhood internet tutorials or teleconference calls.

cancer is too difficult to cure, all combine to result in very low The funding required to support each of our projects for five

and procedures which have been known to doctors for decades. support. This funding broadly covers the areas of capital costs

registration to define the cancer burden and record outcomes, provision of training workshops and drug costs.

income countries. charity for funding. Ideally the hospital in the low- and middle-

income country should be situated in a major city which is

Who we are – vision and mission easily accessible for the population. There must be a strong

World Child Cancer was established in 2007. Our vision is to and competent local leader who is capable of gathering

treatment and care. Our mission is to improve cancer support of parents and the community. Support from the

diagnosis, treatment and palliative care for children across the hospital and hopefully the local health service or Ministry of

developing world, redressing the global inequality in the Health is also required for long-term success.