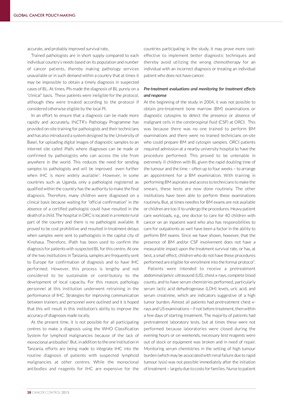 accurate, and probably improved survival rate.. countries participating in the study, it may prove more cost-

of cancer patients, thereby making pathology services individual with an incorrect diagnosis or treating an individual

unavailable or in such demand within a country that at times it patient who does not have cancer.

may be impossible to obtain a timely diagnosis in suspected

cases of BL. At times, PIs made the diagnosis of BL purely on a Pre-treatment evaluations and monitoring for treatment effects

“clinical” basis. These patients were ineligible for the protocol, and response

although they were treated according to the protocol if At the beginning of the study in 2004, it was not possible to

rapidly and accurately, INCTR’s Pathology Programme has malignant cells in the cerebrospinal fluid (CSF) at ORCI. This

Basel, for uploading digital images of diagnostic samples to an who could prepare BM and cytospin samples. ORCI patients

internet site called iPath, where diagnoses can be made or required admission at a nearby university hospital to have the

confirmed by pathologists who can access the site from procedure performed. This proved to be untenable in

anywhere in the world. This reduces the need for sending extremely ill children with BL given the rapid doubling time of

when IHC is more widely available1. However, in some an appointment for a BM examination. With training in

countries such as Uganda, only a pathologist registered as performing BM aspirates and access to technicians to make the

qualified within the country has the authority to make the final smears, these tests are now done routinely. The other

diagnosis. Therefore, many children were diagnosed on a institutions have been able to perform these examinations

clinical basis because waiting for “official confirmation” in the routinely. But, at times needles for BM exams are not available

absence of a certified pathologist could have resulted in the or children are too ill to undergo the procedures. Heavy patient

death of a child. The hospital in DRC is located in a remote rural care workloads, e.g., one doctor to care for 40 children with

part of the country and there is no pathologist available. It cancer on an inpatient ward who also has responsibilities to

when samples were sent to pathologists in the capital city of perform BM exams. Since we have shown, however, that the

Kinshasa. Therefore, iPath has been used to confirm the presence of BM and/or CSF involvement does not have a

diagnosis for patients with suspected BL for this centre. At one measurable impact upon the treatment survival rate, or has, at

of the two institutions in Tanzania, samples are frequently sent best, a small effect, children who do not have these procedures

to Europe for confirmation of diagnosis and to have IHC performed are eligible for enrollment into the formal protocol1.

performed. However, this process is lengthy and not Patients were intended to receive a pretreatment

considered to be sustainable or contributory to the abdominal/pelvic ultrasound (US), chest x-rays, complete blood

development of local capacity. For this reason, pathology counts, and to have serum chemistries performed, particularly

performance of IHC. Strategies for improving communication serum creatinine, which are indicators suggestive of a high

between trainers and personnel were outlined and it is hoped tumor burden. Almost all patients had pretreatment chest x-

that this will result in this institution’s ability to improve the rays and US examinations – if not before treatment, then within

accuracy of diagnoses made locally. a few days of starting treatment. The majority of patients had

At the present time, it is not possible for all participating pretreatment laboratory tests, but at times these were not

System for lymphoid malignancies because of the lack of evening hours or on weekends, necessary test reagents were

monoclonal antibodies . But, in addition to the one institution in out of stock or equipment was broken and in need of repair.

Tanzania, efforts are being made to integrate IHC into the Monitoring serum chemistries in the setting of high tumour

malignancies at other centres. While the monoclonal tumour lysis) was not possible immediately after the initiation

antibodies and reagents for IHC are expensive for the of treatment – largely due to costs for families. Nurse to patient