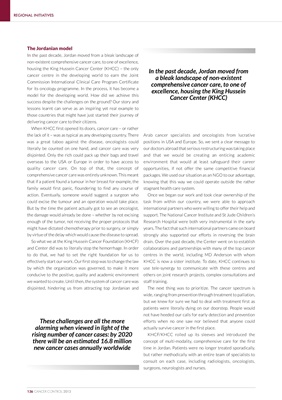 In the past decade, Jordan moved from a bleak landscape of

non-existent comprehensive cancer care, to one of excellence,

housing the King Hussein Cancer Center (KHCC) – the only

In the past decade, Jordan moved from

cancer centre in the developing world to earn the Joint

a bleak landscape of non-existent

comprehensive cancer care, to one of

for its oncology programme. In the process, it has become a

model for the developing world. How did we achieve this

success despite the challenges on the ground? Our story and

lessons learnt can serve as an inspiring yet real example to

those countries that might have just started their journey of

delivering cancer care to their citizens.

When KHCC first opened its doors, cancer care – or rather

the lack of it – was as typical as any developing country. There Arab cancer specialists and oncologists from lucrative

was a great taboo against the disease, oncologists could positions in USA and Europe. So, we sent a clear message to

literally be counted on one hand, and cancer care was very our doctors abroad that serious restructuring was taking place

disjointed. Only the rich could pack up their bags and travel and that we would be creating an enticing academic

quality cancer care. On top of that, the concept of opportunities, if not offer the same competitive financial

comprehensive cancer care was entirely unknown. This meant packages. We used our situation as an NGO to our advantage,

that if a patient found a tumour in her breast for example, the knowing that this way we could operate outside the rather

action. Eventually, someone would suggest a surgeon who Once we began our work and took clear ownership of the

could excise the tumour and an operation would take place. task from within our country, we were able to approach

But by the time the patient actually got to see an oncologist, international partners who were willing to offer their help and

the damage would already be done – whether by not excising support. The National Cancer Institute and St Jude Children’s

enough of the tumor, not receiving the proper protocols that Research Hospital were both very instrumental in the early

might have dictated chemotherapy prior to surgery, or simply years. The fact that such international partners came on board

by virtue of the delay which would cause the disease to spread. strongly also supported our efforts in reversing the brain

So what we at the King Hussein Cancer Foundation (KHCF) drain. Over the past decade, the Center went on to establish

and Center did was to literally stop the hemorrhage. In order collaborations and partnerships with many of the top cancer

to do that, we had to set the right foundation for us to centres in the world, including MD Anderson with whom

effectively start our work. Our first step was to change the law KHCC is now a sister institute. To date, KHCC continues to

by which the organization was governed, to make it more use tele-synergy to communicate with these centres and

conducive to the positive, quality and academic environment others on joint research projects, complex consultations and

we wanted to create. Until then, the system of cancer care was staff training.

disjointed, hindering us from attracting top Jordanian and The next thing was to prioritize. The cancer spectrum is

wide, ranging from prevention through treatment to palliation,

patients were literally dying on our doorstep. People would

not have heeded our calls for early detection and prevention

alarming when viewed in light of the actually survive cancer in the first place.

rising number of cancer cases: by 2020 KHCF/KHCC rolled up its sleeves and introduced the

there will be an estimated 16.8 million concept of multi-modality, comprehensive care for the first

but rather methodically with an entire team of specialists to

consult on each case, including radiologists, oncologists,