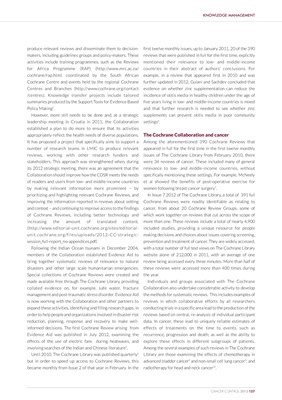 produce relevant reviews and disseminate them to decision- first twelve monthly issues, up to January 2011, 20 of the 390

makers, including guidelines groups and policy-makers. These reviews that were published in full for the first time, explicitly

activities include training programmes, such as the Reviews mentioned their relevance to low- and middle-income

for Africa Programme (RAP) (http://www.mrc.ac.za/ countries in their abstract of authors’ conclusions. For

cochrane/rap.htm) coordinated by the South African example, in a review that appeared first in 2010 and was

Cochrane Centre and events held by the regional Cochrane further updated in 2012, Gulani and Sachdev concluded that

Centres and Branches (http://www.cochrane.org/contact evidence on whether zinc supplementation can reduce the

/centres). Knowledge transfer projects include tailored incidence of otitis media in healthy children under the age of

Policy Making3. and that further research is needed to see whether zinc

However, more still needs to be done and, at a strategic supplements can prevent otitis media in poor community

leadership meeting in Croatia in 2011, the Collaboration settings6.

established a plan to do more to ensure that its activities

appropriately reflect the health needs of diverse populations. The Cochrane Collaboration and cancer

reviews, working with other research funders and issues of The Cochrane Library from February 2010, there

stakeholders. This approach was strengthened when, during were 34 reviews of cancer. These included many of general

its 2012 strategic meeting, there was an agreement that the relevance to low- and middle-income countries, without

Collaboration should improve how the CDSR meets the needs specifically mentioning these settings. For example, McNeely

prioritizing and highlighting relevant Cochrane Reviews, and In Issue 7 2012 of The Cochrane Library, a total of 391 full

and context – and continuing to improve access to the findings cancer, from about 20 Cochrane Review Groups, some of

of Cochrane Reviews, including better technology and which work together on reviews that cut across the scope of

increasing the amount of translated content. more than one. These reviews include a total of nearly 4,900

session_full-report_no-appendices.pdf) prevention and treatment of cancer. They are widely accessed,

Following the Indian Ocean tsunami in December 2004, with a total number of full text views on The Cochrane Library

members of the Collaboration established Evidence Aid to website alone of 212,000 in 2011, with an average of one

bring together systematic reviews of relevance to natural review being accessed every three minutes. More than half of

disasters and other large scale humanitarian emergencies. these reviews were accessed more than 400 times during

Special collections of Cochrane Reviews were created and the year.

made available free through The Cochrane Library, providing Individuals and groups associated with The Cochrane

management and post-traumatic stress disorder. Evidence Aid the methods for systematic reviews. This includes examples of

expand these activities, identifying and filling research gaps, in conducting trials in a specific area lead to the production of the

order to help people and organizations involved in disaster risk reviews based on central, re-analysis of individual participant

reduction, planning, response and recovery to make well- data. In cancer, these lead to uniquely reliable estimates of

informed decisions. The first Cochrane Review arising from effects of treatments on the time to events, such as

Evidence Aid was published in July 2012, examining the recurrence, progression and death; as well as the ability to

effects of the use of electric fans during heatwaves, and explore these effects in different subgroups of patients.

involving searches of the Indian and Chinese literature4. Among the several examples of such reviews in The Cochrane

Until 2010, The Cochrane Library was published quarterly Library are those examining the effects of chemotherapy in

but in order to speed up access to Cochrane Reviews, this advanced bladder cancer8 and non-small cell lung cancer9; and

became monthly from Issue 2 of that year in February. In the radiotherapy for head and neck cancer10.