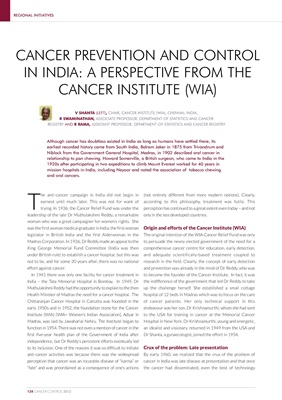 IN INDIA: A PERSPECTIVE FROM THE

Although cancer has doubtless existed in India as long as humans have settled there, its

earliest recorded history came from South India, Balram Jaker in 1875 from Trivandrum and

Niblock from the Government General Hospital, Madras, in 1902 described oral cancer in

relationship to pan chewing. Howard Somerville, a British surgeon, who came to India in the

mission hospitals in India, including Neyoor and noted the association of tobacco chewing

he anti-cancer campaign in India did not begin in (not entirely different from more modern notions). Clearly,

earnest until much later. This was not for want of according to this philosophy, treatment was futile. This

trying. In 1936, the Cancer Relief Fund was under the perception has continued to a great extent even today – and not

leadership of the late Dr Muthulakshmi Reddy, a remarkable only in the less developed countries.

woman who was a great campaigner for women’s rights. She

Madras Corporation. In 1936, Dr Reddy made an appeal to the to persuade the newly elected government of the need for a

under British rule) to establish a cancer hospital, but this was and adequate scientifically-based treatment coupled to

not to be, and for some 30 years after, there was no national research in the field. Clearly, the concept of early detection

effort against cancer. and prevention was already in the mind of Dr Reddy, who was

In 1941 there was only one facility for cancer treatment in to become the founder of the Cancer Institute. In fact, it was

India – the Tata Memorial Hospital in Bombay. In 1949, Dr the indifference of the government that led Dr Reddy to take

Muthulakshmi Reddy had the opportunity to explain to the then up the challenge herself. She established a small cottage

Health Minister of Madras the need for a cancer hospital. The hospital of 12 beds in Madras which was to focus on the care

Chittaranjan Cancer Hospital in Calcutta was founded in the of cancer patients. Her only technical support in this

early 1950s and in 1952, the foundation stone for the Cancer endeavour was her son, Dr Krishnamurthi, whom she had sent

Institute (WIA) [WIA= Women’s Indian Association], Adyar in to the USA for training in cancer at the Memorial Cancer

Madras, was laid by Jawaharlal Nehru. The Institute began to Hospital in New York. Dr Krishnamurthi, young and energetic,

function in 1954. There was not even a mention of cancer in the an idealist and visionary, returned in 1949 from the USA and

first five-year health plan of the Government of India after Dr Shanta, a gynaecologist, joined the effort in 1954.

to its inclusion. One of the reasons it was so difficult to initiate Crux of the problem: Late presentation

anti-cancer activities was because there was the widespread By early 1960, we realized that the crux of the problem of

“fate” and was preordained as a consequence of one’s actions the cancer had disseminated, even the best of technology