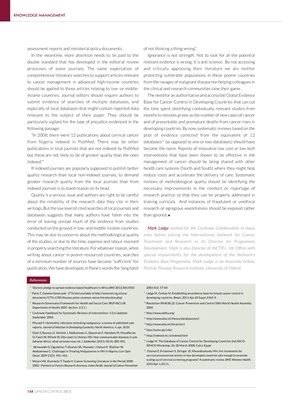 assessment reports and ministerial policy documents. of not thinking a thing wrong”.

In the meantime, more attention needs to be paid to the Ignorance is not strength. Not to look for all the potential

double standard that has developed in the editorial review relevant evidence is wrong; it is anti-science. By not accessing

processes of some journals. The same expectation of and critically appraising their literature we are neither

should be applied to those articles relating to low- or middle- the clinical and research communities raise their game.

income countries. Journal editors should require authors to The need for an authoritative and accessible Global Evidence

submit evidence of searches of multiple databases, and Base for Cancer Control in Developing Countries that can cut

relevant to the subject of their paper. They should be months to minutes grows as the number of new cases of cancer

following passage: developing countries. By now, systematic reviews based on the

“In 2008, there were 12 publications about cervical cancer pool of evidence collected from the equivalent of 12

from Nigeria indexed in PubMed. There may be other databases16 (as opposed to one or two databases) should have

publications in local journals that are not indexed by PubMed become the norm. Reports of innovative low cost or low tech

indexed.”6 management of cancer should be being shared with other

indexed journals is to stand reason on its head. necessary improvements in the conduct or reportage of

about the reliability of the research data they cite in their training curricula. And instances of fraudulent or unethical

writings. But the low level of cited searches of local journals and research or egregious wastefulness should be exposed rather

databases suggests that many authors have fallen into the than ignored. l

error of leaving unread much of the evidence from studies

conducted on the ground in low- and middle-income countries. Mark Lodge worked for the Cochrane Collaboration in many

of the studies, or due to the time, expense and labour involved Treatment and Research as its Director for Programme

in properly searching the literature. For whatever reason, when Development. Mark is also Director of INCTR’s UK Office with

writing about cancer in poorer-resourced countries, searches special responsibility for the development of the Network’s

of a minimum number of sources have become “sufficient” for Evidence Base Programme. Mark Lodge is an Associate Fellow,