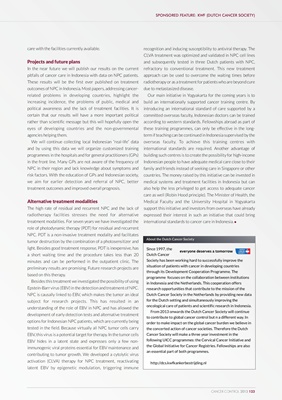 care with the facilities currently available. recognition and inducing susceptibility to antiviral therapy. The

CLVA treatment was optimized and validated in NPC cell lines

Projects and future plans and subsequently tested in three Dutch patients with NPC,

In the near future we will publish our results on the current refractory to conventional treatment. This new treatment

pitfalls of cancer care in Indonesia with data on NPC patients. approach can be used to overcome the waiting times before

outcomes of NPC in Indonesia. Most papers, addressing cancer- due to metastasized disease.

related problems in developing countries, highlight the Our main initiative in Yogyakarta for the coming years is to

increasing incidence, the problems of public, medical and build an internationally supported cancer training centre. By

political awareness and the lack of treatment facilities. It is introducing an international standard of care supported by a

certain that our results will have a more important political committed overseas faculty, Indonesian doctors can be trained

rather than scientific message but this will hopefully open the according to western standards. Fellowships abroad as part of

eyes of developing countries and the non-governmental these training programmes, can only be effective in the long-

agencies helping them. term if teaching can be continued in Indonesia supervised by the

We will continue collecting local Indonesian “real-life” data overseas faculty. To achieve this training centres with

and by using this data we will organize customized training international standards are required. Another advantage of

in the front line. Many GPs are not aware of the frequency of Indonesian people to have adequate medical care close to their

risk factors. With the education of GPs and Indonesian society, countries. The money raised by this initiative can be invested in

we aim for earlier detection and referral of NPC, better medical systems and treatment facilities in Indonesia but can

care as well (Robin Hood principle). The Minister of Health, the

treatment modalities. For seven years we have investigated the international standards to cancer care in Indonesia. l

role of photodynamic therapy (PDT) for residual and recurrent

NPC. PDT is a non-invasive treatment modality and facilitates

About the Dutch Cancer Society

tumor destruction by the combination of a photosensitizer and

light. Besides good treatment response, PDT is inexpensive, has Since 1997, the

minutes and can be performed in the outpatient clinic. The Society has been working hard to successfully improve the

situation of patients with cancer in developing countries

through its Development Cooperation Programme. The

based on this therapy.

programme focuses on the collaboration between institutions

Besides this treatment we investigated the possibility of using in Indonesia and the Netherlands. This cooperation offers

Epstein-Barr virus (EBV) in the detection and treatment of NPC. research opportunities that contribute to the mission of the

NPC is causally linked to EBV, which makes the tumor an ideal Dutch Cancer Society in the Netherlands by providing new data

subject for research projects. This has resulted in an for the Dutch setting and simultaneously improving the

oncological care of patients and scientific research in Indonesia.

From 2013 onwards the Dutch Cancer Society will continue

to contribute to global cancer control but n a different way. In

options for Indonesian NPC patients, which are currently being order to make impact on the global cancer burden we believe in

tested in the field. Because virtually all NPC tumor cells carry the concerted action of cancer societies. Therefore the Dutch

EBV, this virus is a potential target for therapy. In the tumor cells Cancer Society will make a three year investment in the

EBV hides in a latent state and expresses only a few non- following UICC programmes: the Cervical Cancer Initiative and

the Global Initiative for Cancer Registries. Fellowships are also

an essential part of both programmes.

contributing to tumor growth. We developed a cytolytic virus