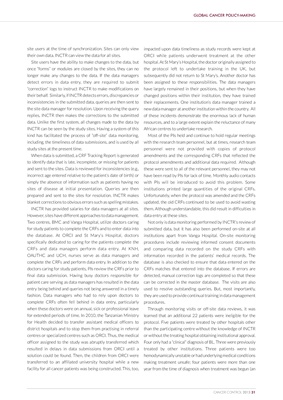 site users at the time of synchronization. Sites can only view impacted upon data timeliness as study records were kept at

their own data. INCTR can view the data for all sites. ORCI while patients underwent treatment at the other

Site users have the ability to make changes to the data, but hospital. At St Mary’s Hospital, the doctor originally assigned to

once “forms” or modules are closed by the sites, they can no the protocol left to undertake training in the UK, but

longer make any changes to the data. If the data managers subsequently did not return to St Mary’s. Another doctor has

detect errors in data entry, they are required to submit been assigned to these responsibilities. The data managers

“correction” logs to instruct INCTR to make modifications on have largely remained in their positions, but when they have

their behalf. Similarly, if INCTR detects errors, discrepancies or changed positions within their institution, they have trained

inconsistencies in the submitted data, queries are then sent to their replacements. One institution’s data manager trained a

the site data manager for resolution. Upon receiving the query new data manager at another institution within the country. All

replies, INCTR then makes the corrections to the submitted of these incidents demonstrate the enormous lack of human

data. Unlike the first system, all changes made to the data by resources, and to a large extent explain the reluctance of many

INCTR can be seen by the study sites. Having a system of this African centres to undertake research.

kind has facilitated the process of “off-site” data monitoring, Most of the PIs held and continue to hold regular meetings

including, the timeliness of data submissions, and is used by all with the research team personnel, but at times, research team

study sites at the present time. personnel were not provided with copies of protocol

When data is submitted, a CRF Tracking Report is generated amendments and the corresponding CRFs that reflected the

to identify data that is late, incomplete, or missing for patients protocol amendments and additional data required. Although

and sent to the sites. Data is reviewed for inconsistencies (e.g., these were sent to all of the relevant personnel, they may not

incorrect age entered relative to the patient’s date of birth) or have been read by PIs for lack of time. Monthly audio contacts

simply the absence of information such as patients having no with PIs will be introduced to avoid this problem. Some

sites of disease at initial presentation. Queries are then institutions printed large quantities of the original CRFs.

prepared and sent to the sites for resolution. INCTR makes Unfortunately, when the protocol was amended and the CRFs

blanket corrections to obvious errors such as spelling mistakes. updated, the old CRFs continued to be used to avoid wasting

INCTR has provided salaries for data managers at all sites. them. Although understandable, this did result in difficulties in

However, sites have different approaches to data management. data entry at these sites.

Two centres, BMC and Vanga Hospital, utilize doctors caring Not only is data monitoring performed by INCTR’s review of

for study patients to complete the CRFs and to enter data into submitted data, but it has also been performed on-site at all

CRFs and data managers perform data entry. At KNH, and comparing data recorded on the study CRFs with

OAUTHC and UCH, nurses serve as data managers and information recorded in the patients’ medical records. The

complete the CRFs and perform data entry. In addition to the database is also checked to ensure that data entered on the

doctors caring for study patients, PIs review the CRFs prior to CRFs matches that entered into the database. If errors are

final data submission. Having busy doctors responsible for detected, manual correction logs are completed so that these

patient care serving as data managers has resulted in the data can be corrected in the master database. The visits are also

entry being behind and queries not being answered in a timely used to resolve outstanding queries. But, most importantly,

fashion. Data managers who had to rely upon doctors to they are used to provide continual training in data management

when these doctors were on annual, sick or professional leave Through monitoring visits or off-site data reviews, it was

for extended periods of time. In 2010, the Tanzanian Ministry learned that an additional 22 patients were ineligible for the

for Health decided to transfer assistant medical officers to protocol. Five patients were treated by other hospitals other

centres or specialized centres such as ORCI. Thus, the medical or without the treating hospital obtaining institutional approval.

officer assigned to the study was abruptly transferred which Four only had a “clinical” diagnosis of BL. Three were previously

resulted in delays in data submissions from ORCI until a treated by other institutions. Three patients were too

solution could be found. Then, the children from ORCI were hemodynamically unstable or had underlying medical conditions

transferred to an affiliated university hospital while a new making treatment unsafe; four patients were more than one

facility for all cancer patients was being constructed. This, too, year from the time of diagnosis when treatment was begun (an