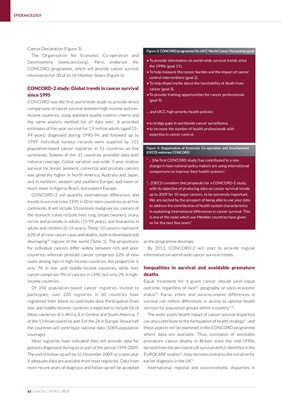 The Organisation for Economic Co-operation and

Development (www.oecd.org), Paris, endorses the • To provide information on world-wide survival trends since

• To help measure the cancer burden and the impact of cancer

information for 30 of its 34 Member States (Figure 4). control interventions (goal 2).

• To help dispel myths about the inevitability of death from

since 1995 • To provide training opportunities for cancer professionals

CONCORD was the first world-wide study to provide direct (goal 9).

comparisons of cancer survival between high-income and low-

the same analytic method for all data sets3. It provided • to bridge gaps in worldwide cancer surveillance.

estimates of five-year survival for 1.9 million adults (aged 15– • to increase the number of health professionals with

99 years) diagnosed during 1990–94 and followed up to expertise in cancer control.

1999. Individual tumour records were supplied by 101

continents. Sixteen of the 31 countries provided data with

change in how national policy makers are using international

comparisons to improve their health systems”.

was generally higher in North America, Australia and Japan,

and in northern, western and southern Europe, and lower or “... [OECD considers the] proposals for a CONCORD-2 study,

much lower in Algeria, Brazil, and eastern Europe. with its objective of producing data on cancer survival trends

CONCORD-2 will quantify international differences and up to 2009 for 10 major cancers, to be extremely important.

to address the contribution of health system characteristics

continents. It will include 10 common malignancies: cancers of

in explaining international differences in cancer survival. This

the stomach, colon, rectum, liver, lung, breast (women), ovary, is one of the tasks which our Member countries have given

cervix and prostate in adults (15-99 years), and leukaemia in us for the next few years.”

63% of all new cancer cases and deaths, both in developed and

developing38 regions of the world (Table 1). The proportions as the programme develops.

for individual cancers differ widely between rich and poor By 2013, CONCORD-2 will start to provide regular

cases among men in high-income countries, the proportion is

only 7% in low- and middle-income countries, while liver Inequalities in survival and avoidable premature

income countries. Equal treatment for a given cancer should yield equal

Of 350 population-based cancer registries invited to outcome, regardless of race39, geography or socio-economic

participate, over 220 registries in 60 countries have status40. Racial, ethnic and socio-economic differences in

registered their intent to contribute data. Participation from survival can reflect differences in access to optimal health

low- and middle-income countries is expected to include 26 of services for population groups within a country41,42.

these countries: 8 in Africa, 8 in Central and South America, 7 The wider public health impact of cancer survival disparities

of the 13 Asian countries and 3 of the 24 in Europe. About half can also contribute to the formulation of health strategy43, and

coverage). where data are available. Thus, estimates of avoidable

Most registries have indicated they will provide data for premature cancer deaths in Britain since the mid-1990s,

patients diagnosed during all or part of the period 1995-2009. derived from the persistent UK survival deficit identified in the

The end of follow-up will be 31 December 2009, or a later year EUROCARE studies44, have become central to the initiative for

if adequate data are available from most registries. Data from earlier diagnosis in the UK45

more recent years of diagnosis and follow-up will be accepted International, regional and socio-economic disparities in