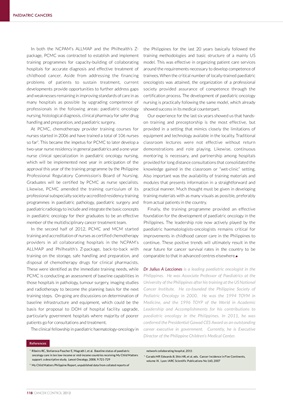 package, PCMC was contracted to establish and implement training methodologies and basic structure of a mainly US

training programmes for capacity-building of collaborating model. This was effective in organizing patient care services

childhood cancer. Aside from addressing the financing trainees. When the critical number of locally-trained paediatric

problems of patients to sustain treatment, current oncologists was attained, the organization of a professional

and weaknesses remaining in improving standards of care in as certification process. The development of paediatric oncology

many hospitals as possible by upgrading competence of nursing is practically following the same model, which already

professionals in the following areas: paediatric oncology showed success in its medical counterpart.

nursing, histological diagnosis, clinical pharmacy for safer drug Our experience for the last six years showed us that hands-

handling and preparation, and paediatric surgery. on training and preceptorship is the most effective, but

At PCMC, chemotherapy provider training courses for provided in a setting that mimics closely the limitations of

nurses started in 2006 and have trained a total of 106 nurses equipment and technology available in the locality. Traditional

so far . This became the impetus for PCMC to later develop a classroom lectures were not effective without return

approval this year of the training programme by the Philippine knowledge gained in the classroom or “wet-clinic” setting.

Professional Regulatory Commission’s Board of Nursing. Also important was the availability of training materials and

Graduates will be certified by PCMC as nurse specialists. modules that presents information in a straightforward and

Likewise, PCMC amended the training curriculum of its practical manner. Much thought must be given in developing

programmes in paediatric pathology, paediatric surgery and from actual patients in the country.

paediatric radiology to include and integrate the basic concepts Finally, the training programme provided an effective

member of the multidisciplinary cancer treatment team. Philippines. The leadership role now actively played by the

In the second half of 2012, PCMC and MCM started paediatric haematologists-oncologists remains critical for

providers in all collaborating hospitals in the NCPAM’s continue. These positive trends will ultimately result in the

ALLMAP and Philhealth’s Z-package, back-to-back with near future for cancer survival rates in the country to be

training on the storage, safe handling and preparation, and comparable to that in advanced centres elsewhere.l

These were identified as the immediate training needs, while Dr Julius A Lecciones is a leading paediatric oncologist in the

PCMC is conducting an assessment of baseline capabilities in Philippines. He was Associate Professor of Paediatrics at the

those hospitals in pathology, tumour surgery, imaging studies University of the Philippines after his training at the US National

and radiotherapy to become the planning basis for the next Cancer Institute. He co-founded the Philippine Society of

training steps. On-going are discussions on determination of Pediatric Oncology in 2000. He was the 1994 TOYM in

baseline infrastructure and equipment, which could be the Medicine, and the 1996 TOYP of the World in Academic

basis for proposal to DOH of hospital facility upgrade, Leadership and Accomplishments for his contributions to

particularly government hospitals where majority of poorer paediatric oncology in the Philippines. In 2011, he was

patients go for consultations and treatment. conferred the Presidential Gawad CES Award as an outstanding

The clinical fellowship in paediatric haematology-oncology in career executive in government. Currently, he is Executive