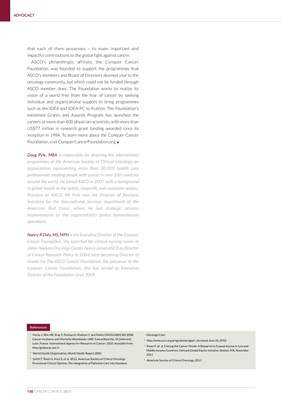 that each of them possesses – to make important and

impactful contributions to the global fight against cancer.

Foundation, was founded to support the programmes that

ASCO's members and Board of Directors deemed vital to the

oncology community, but which could not be funded through

ASCO member dues. The Foundation works to realize its

such as the IDEA and IDEA-PC to fruition. The Foundation's

esteemed Grants and Awards Program has launched the

careers of more than 800 physician-scientists, with more than

US$77 million in research grant funding awarded since its

inception in 1984. To learn more about the Conquer Cancer

Doug Pyle, MBA is responsible for directing the international

programmes of the American Society of Clinical Oncology, an

professionals treating people with cancer in over 100 countries

around the world. He joined ASCO in 2007 with a background

in global health in the public, nonprofit, and corporate sectors.

Previous to ASCO, Mr Pyle was the Director of Business

Solutions for the International Services department of the

improvements to the organization's global humanitarian

Nancy R Daly, MS, MPH is the Executive Director of the Conquer

Cancer Foundation. She launched her clinical nursing career at

of Cancer Research Policy in 2004, later becoming Director of

Grants for The ASCO Cancer Foundation, the precursor to the

Conquer Cancer Foundation. She has served as Executive

Director of the Foundation since 2009.

Lyon, France: International Agency for Research on Cancer; 2010. Available from:

Knaul F, et. al, Closing the Cancer Divide: A Blueprint to Expand Access in Low and

Provisional Clinical Opinion: The Integration of Palliative Care into Standard