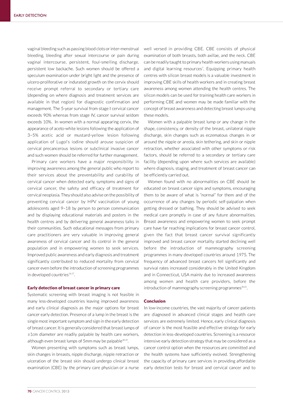 bleeding, bleeding after sexual intercourse or pain during examination of both breasts, both axillae, and the neck. CBE

persistent low backache. Such women should be offered a and digital learning resources7. Equipping primary health

receive prompt referral to secondary or tertiary care awareness among women attending the health centres. The

exceeds 90% whereas from stage IV, cancer survival seldom these models.

exceeds 10%. In women with a normal appearing cervix, the Women with a palpable breast lump or any change in the

appearance of aceto-white lesions following the application of shape, consistency, or density of the breast, unilateral nipple

3–5% acetic acid or mustard-yellow lesion following discharge, skin changes such as eczematous changes in or

application of Lugol’s iodine should arouse suspicion of around the nipple or areola, skin tethering, and skin or nipple

cervical precancerous lesions or subclinical invasive cancer retraction, whether associated with other symptoms or risk

improving awareness among the general public who report to where diagnosis, staging, and treatment of breast cancer can

their services about the preventability and curability of be efficiently carried out.

cervical cancer when detected early, symptoms and signs of Women found with no abnormalities on CBE should be

cervical cancer, the safety and efficacy of treatment for educated on breast cancer signs and symptoms, encouraging

cervical neoplasia. They should also advise on the possibility of them to be aware of what is “normal” for them and of the

adolescents aged 9–18 by person to person communication getting dressed or bathing. They should be advised to seek

and by displaying educational materials and posters in the medical care promptly in case of any future abnormalities.

their communities. Such educational messages from primary care have far reaching implications for breast cancer control,

population and in empowering women to seek services. before the introduction of mammography screening

Improved public awareness and early diagnosis and treatment programmes in many developed countries around 1975. The

in developed countries16,17. and in Connecticut, USA mainly due to increased awareness

among women and health care providers, before the

Systematic screening with breast imaging is not feasible in

and early clinical diagnosis as the major options for breast In low-income countries, the vast majority of cancer patients

cancer early detection. Presence of a lump in the breast is the are diagnosed in advanced clinical stages and health care

of breast cancer. It is generally considered that breast lumps of of cancer is the most feasible and effective strategy for early

although even breast lumps of 5mm may be palpable18,19. intensive early detection strategy that may be considered as a

Women presenting with symptoms such as breast lumps, cancer control option when the resources are committed and