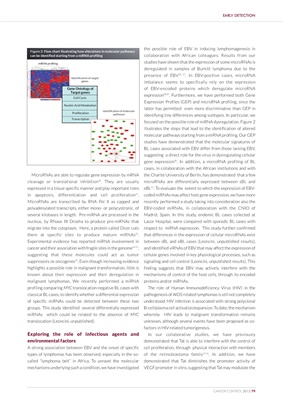 the possible role of EBV in inducing lymphomagenesis in

can be identified starting from a miRNA profiling collaboration with African colleagues. Results from our

deregulated in samples of Burkitt lymphoma due to the

genes imbalance seems to specifically rely on the expression

Gene Ontology of of EBV-encoded proteins which deregulate microRNA

expression28,29. Furthermore, we have performed both Gene

Expression Profiles (GEP) and microRNA profiling, since the

latter has permitted even more discriminative than GEP in

identifying tiny differences among subtypes. In particular, we

focused on the possible role of miRNA dysregulation. Figure 2

illustrates the steps that lead to the identification of altered

molecular pathways starting from a miRNA profiling. Our GEP

studies have demonstrated that the molecular signatures of

BL cases associated with EBV differ from those lacking EBV,

suggesting a direct role for the virus in dysregulating cellular

gene expression30. In addition, a microRNA profiling of BL

cases, in collaboration with the African institutions and with

MicroRNAs are able to regulate gene expression by mRNA the Charité University of Berlin, has demonstrated that a few

cleavage or translational inhibition20. They are usually microRNAs are differentially expressed between sBL and

expressed in a tissue specific manner and play important roles eBL31. To evaluate the extent to which the expression of EBV-

in apoptosis, differentiation and cell proliferation . coded miRNAs may affect host gene expression, we have more

polyadenylated transcripts, either mono- or polycystronic, of EBV-coded miRNAs, in collaboration with the CNIO of

several kilobases in length. Pre-miRNA are precessed in the Madrid, Spain. In this study, endemic BL cases collected at

nucleus, by RNase III Drosha to produce pre-miRNAs that Lacor Hospital, were compared with sporadic BL cases with

them at specific sites to produce mature miRNAs22. that differences in the expression of cellular microRNAs exist

cancer and their association with fragile sites in the genome23-25, and identified viRNAs of EBV that may affect the expression of

suggesting that these molecules could act as tumor cellular genes involved in key physiological processes, such as

suppressors or oncogenes26. Even though increasing evidence signalling and cell control (Leoncini, unpublished results). This

highlights a possible role in malignant transformation, little is finding suggests that EBV may actively interfere with the

known about their expression and their deregulation in mechanisms of control of the host cells, through its encoded

malignant lymphomas. We recently performed a miRNA proteins and/or miRNAs.

classical BL cases, to identify whether a differential expression pathogenesis of AIDS-related lymphomas is still not completely

of specific miRNAs could be detected between these two understood. HIV infection is associated with strong polyclonal

translocation (Leoncini, unpublished). unknown, although several events have been proposed as co-

Exploring the role of infectious agents and In our collaborative studies, we have previously

A strong association between EBV and the onset of specific cell proliferation, through physical interaction with members

types of lymphomas has been observed, especially in the so- of the retinoblastoma family15,16. In addition, we have

called “lymphoma belt” in Africa. To unravel the molecular demonstrated that Tat diminishes the promoter activity of

mechanisms underlying such a condition, we have investigated VEGF promoter in vitro, suggesting that Tat may modulate the