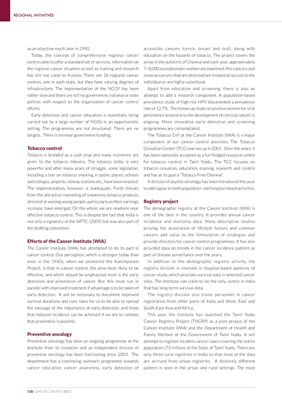 as an objective much later in 1990. accessible cancers (cervix, breast and oral), along with

Today, the concept of comprehensive regional cancer education on the hazards of tobacco. The project covers the

centres able to offer a standard set of services, information on areas in the outskirts of Chennai and each year, approximately

the regional cancer situation as well as training and research 7–8,000 asymptomatic women are examined. Pre-cancers and

has still not come to fruition. There are 26 regional cancer invasive cancers that are detected are treated at no cost to the

centres, one in each state, but they have varying degrees of individual or are highly subsidized.

infrastructure. The implementation of the NCCP has been Apart from education and screening, there is also an

rather slow and there are still no government, national or state attempt to add a research component. A population-based

efforts. rate of 12.7%. The follow-up study on positive women for viral

carried out by a large number of NGOs in an opportunistic ongoing. More innovative early detection and screening

targets. There is minimal government funding. The Tobacco Cell at the Cancer Institute (WIA) is a major

component of our cancer control activities. The Tobacco

Tobacco control Cessation Center (TCC) was set up in 2001. Over the years, it

given to the tobacco industry. The tobacco lobby is very for tobacco control in Tamil Nadu. The TCC focuses on

powerful and after many years of struggle, some legislation, tobacco cessation, education, training, research and control

including a ban on tobacco smoking in public places, schools and has as its goal a “Tobacco Free Chennai”.

and colleges, airports, railway stations etc., have been enacted. A division of psycho-oncology has been introduced this year

The implementation, however, is inadequate. Fresh threats to add vigour to both population- and hospital-based activities.

from the attractive marketing of smokeless tobacco products

increase, have emerged. On the whole, we are nowhere near The demographic registry at the Cancer Institute (WIA) is

effective tobacco control. This is despite the fact that India is one of the best in the country. It provides annual cancer

not only a signatory of the WFTC (2005) but was also part of incidence and mortality data. Many descriptive studies

the drafting committee. proving the association of lifestyle factors and common

cancers add value to the formulation of strategies and

Efforts of the Cancer Institute (WIA) provide direction for cancer control programmes. It has also

cancer control. Our perception, which is stronger today than part of disease surveillance over the years.

even in the 1960s, when we pioneered the Kanchipuram In addition to the demographic registry activity, the

Project, is that in cancer control, the area most likely to be registry division is involved in hospital-based patterns of

effective, and which should be emphasized most is the early cancer study, which provides survival data in selected cancer

detection and prevention of cancer. But this must run in sites. The Institute can claim to be the only centre in India

parallel with improved treatment if advantage is to be taken of that has long-term survival data.

early detection. It will be necessary to document improved The registry division also trains personnel in cancer

survival durations and cure rates for us to be able to spread registration from other parts of India and West, East and

the message of the importance of early detection, and show South-East Asia and Africa.

that reduced incidence can be achieved if we are to validate This year, the Institute has launched the Tamil Nadu

that prevention is possible. Cancer Registry Project (TNCRP) as a joint project of the

Cancer Institute (WIA) and the Department of Health and

Preventive oncology Family Welfare of the Government of Tamil Nadu. It will

Institute from its inception and an independent division of population (72 million) of the State of Tamil Nadu. There are

preventive oncology has been functioning since 2003. The only three rural registries in India so that most of the data

department has a continuing outreach programme towards are accrued from urban registries. A distinctly different

cancer education, cancer awareness, early detection of pattern is seen in the urban and rural settings. The most