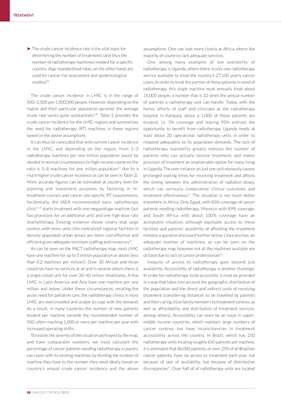 ‰ The crude cancer incidence rate is the vital input for assumptions. One can look more closely at Africa, where the

determining the number of treatments (and thus the majority of countries lack adequate services.

country. (Age-standardised rates, on the other hand, are radiotherapy is Uganda, where there is only one radiotherapy

studies)29. cases. In order to treat the portion of these patients in need of

radiotherapy, this single machine must annually treat about

The crude cancer incidence in LMIC is in the range of 16,000 people, a number that is 32 times the annual number

region and their particular population pyramid, the average heroic efforts of staff and clinicians at the radiotherapy

crude rate varies quite substantially . Table 2 provides the hospital in Kampala, about a 1,000 of these patients are

crude cancer incidence for the LMIC regions and summarizes treated, i.e. 5% coverage and leaving 95% without the

the need for radiotherapy (RT) machines in these regions opportunity to benefit from radiotherapy. Uganda needs at

based on the above assumptions. least about 20 operational radiotherapy units in order to

It can thus be concluded that with current cancer incidence respond adequately to its population demands. The lack of

in the LMIC, and depending on the region, from 1–3 radiotherapy availability greatly reduces the number of

radiotherapy machines per one million population would be patients who can actually receive treatment, and makes

ratio is 5–8 machines for one million population due to a in Uganda. The over-reliance on just one unit obviously causes

much higher crude cancer incidence as can be seen in Table 2). prolonged waiting times for receiving treatment and affects

More accurate figures can be estimated at country level for the timing between the administration of radiation doses,

treatment courses and cancer site-specific RT requirements. treatment effectiveness16. The situation is not much better

Incidentally, the IAEA recommended basic radiotherapy elsewhere in Africa. Only Egypt, with 85% coverage of cancer

densely populated urban areas) are more cost-effective and remains a question discussed further below. Libya also has an

efficient given adequate minimum staffing and resources29. adequate number of machines, as can be seen on the

have one machine for up to 5 million population or above (less utilized due to lack of cancer professionals31.

than 0.2 machines per million!). Over 30 African and Asian Inequity of access to radiotherapy goes beyond just

countries have no services at all and in several others there is availability. Accessibility of radiotherapy is another challenge.

a single cobalt unit for over 30–40 million inhabitants. A few In order for radiotherapy to be accessible, it must be provided

million and below. Under these circumstances, recalling the the population and the direct and indirect costs of receiving

acute need for palliative care, the radiotherapy clinics in most treatment (considering distances to be travelled by patients

LMIC are overcrowded and unable to cope with the demand. and their caring close family members to treatment centres, as

As a result, in many countries the number of new patients well as affordability and distribution of treatment services,

treated per machine exceeds the recommended number of among others). Accessibility can even be an issue in upper-

500, often reaching 1,000 or more per machine per year with middle income countries, which maintain large numbers of

increased operating shifts. cancer centres, but have inconsistencies in treatment

To realize the severity of the situation portrayed by the map, accessibility across the country. In Brazil, which has 250

and have comparable numbers, we must calculate the radiotherapy units treating roughly 650 patients per machine,

percentage of cancer patients needing radiotherapy a country it is estimated that 86,000 patients, or over 25% of all Brazilian

can cover with its existing machines by dividing the number of cancer patients, have no access to treatment each year, not

machine they have to the number they need ideally based on because of lack of availability, but because of distribution

country’s annual crude cancer incidence and the above discrepancies32. Over half of all radiotherapy units are located