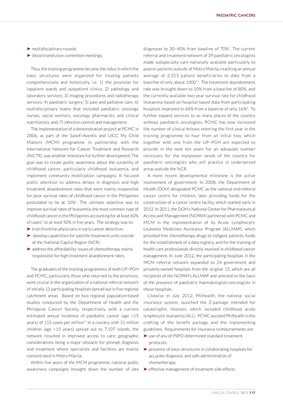 ‰ multidisciplinary rounds; diagnoses to 30–40% from baseline of 70%2. The current

Thus, the training programme became the nidus in which the poorer patients outside of Metro Manila, reaching an annual

basic structures were organized for treating patients average of 2,553 patient beneficiaries to date from a

comprehensively and holistically, i.e. 1) the provision for baseline of only about 10001,2. The treatment abandonment

inpatient wards and outpatient clinics; 2) pathology and rate was brought down to 10% from a baseline of 80%, and

multidisciplinary teams that included paediatric oncology hospitals improved to 68% from a baseline of only 16%2. To

nurses, social workers, oncology pharmacists and clinical further expand services to as many places of the country

nutritionists, and; 7) infection control and management. without paediatric oncologists, PCMC has now increased

2006, as part of the Sanofi-Aventis and UICC My Child training programme to four from an initial two, which

(INCTR), was another milestone for further development. The necessary for the manpower needs of the country for

childhood cancer, particularly childhood leukaemia, and areas outside the NCR.

public attention to address delays in diagnosis and high involvement of government. In 2008, the Department of

for poor survival rates of childhood cancer in the Philippines cancer centre for children, later providing funds for the

postulated to be at 10%1. The ultimate objective was to construction of a cancer centre facility, which started early in

improve survival rates of leukaemia, the most common type of 2012. In 2011, the DOH’s National Center for Pharmaceutical

of cases , to at least 50% in five years. The strategy was to: MCM in the implementation of its Acute Lymphocytic

of the National Capital Region (NCR); for the establishment of a data registry, and for the training of

responsible for high treatment abandonment rates. management. In June 2012, the participating hospitals in the

The graduates of the training programmes of both UP–PGH privately-owned hospitals from the original 13, which are all

and PCMC, particularly those who returned to the provinces, recipients of the NCPAM’s ALLMAP and selected on the basis

of initially 13 participating hospitals spread out in five regional those hospitals.

studies conducted by the Department of Health and the insurance system, launched the Z-package intended for

years) of 115 cases per million1,3 in a country with 31 million crafting of the benefit package and the implementing

children (age <15 years) spread out to 7,107 islands, the guidelines. Requirements for insurance reimbursements are:

network resulted in improved access to care; geographic ‰ use of any of PSPO-determined standard treatment

considerations being a major obstacle for prompt diagnosis protocols;

concentrated in Metro Manila. accurate diagnosis, and safe administration of

Within five years of the MCM programme, national public chemotherapy;

awareness campaigns brought down the number of late ‰ effective management of treatment side effects.