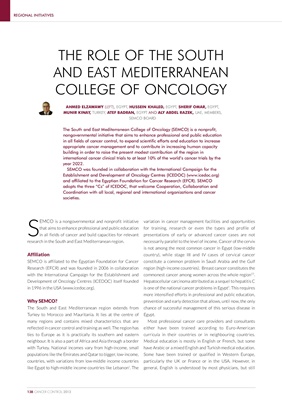 THE ROLE OF THE SOUTH

The South and East Mediterranean College of Oncology (SEMCO) is a nonprofit,

nongovernmental initiative that aims to enhance professional and public education

in all fields of cancer control, to expand scientific efforts and education to increase

appropriate cancer management and to contribute in increasing human capacity

SEMCO was founded in collaboration with the International Campaign for the

and affiliated to the Egyptian Foundation for Cancer Research (EFCR). SEMCO

adopts the three “Cs” of ICEDOC, that welcome Cooperation, Collaboration and

Coordination with all local, regional and international organizations and cancer

that aims to enhance professional and public education for training, research or even the types and profile of

research in the South and East Mediterranean region. necessarily parallel to the level of income. Cancer of the cervix

is not among the most common cancer in Egypt (low-middle

Research (EFCR) and was founded in 2006 in collaboration region (high-income countries). Breast cancer constitutes the

with the International Campaign for the Establishment and commonest cancer among women across the whole region2,3.

in 1996 in the USA (www.icedoc.org). is one of the national cancer problems in Egypt3. This requires

Why SEMCO? prevention and early detection that allows, until now, the only

Turkey to Morocco and Mauritania. It lies at the centre of Egypt.

reflected in cancer control and training as well. The region has either have been trained according to Euro-American

ties to Europe as it is practically its southern and eastern curricula in their countries or in neighbouring countries.

neighbour. It is also a part of Africa and Asia through a border Medical education is mostly in English or French, but some

with Turkey. National incomes vary from high-income, small have Arabic or a mixed English and Turkish medical education.

populations like the Emirates and Qatar to bigger, low-income, Some have been trained or qualified in Western Europe,

countries, with variations from low-middle income countries particularly the UK or France or in the USA. However, in

like Egypt to high-middle income countries like Lebanon . The general, English is understood by most physicians, but still