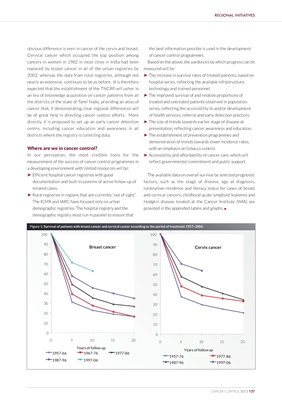 obvious difference is seen in cancer of the cervix and breast. the best information possible is used in the development

Cervical cancer which occupied the top position among of cancer control programmes.

cancers in women in 1982 in most cities in India had been Based on the above, the yardsticks by which progress can be

replaced by breast cancer in all of the urban registries by measured will be:

2002, whereas the data from rural registries, although not ‰ The increase in survival rates of treated patients, based on

nearly as extensive, continues to be as before. It is therefore hospital series, reflecting the available infrastructure,

expected that the establishment of the TNCRP will usher in technology and trained personnel.

the districts of the state of Tamil Nadu, providing an atlas of treated and untreated patients observed in population

cancer that, if demonstrating clear regional differences will series, reflecting the accessibility to and/or development

directly, it is proposed to set up an early cancer detection ‰ The size of trends towards earlier stage of disease at

centre, including cancer education and awareness in all presentation, reflecting cancer awareness and education.

districts where the registry is collecting data. ‰ The establishment of prevention programmes and

Where are we in cancer control? with an emphasis on tobacco control.

In our perception, the most credible tools for the ‰ Accessibility and affordability of cancer care, which will

measurement of the success of cancer control programmes in reflect governmental commitment and public support.

a developing environment with limited resources will be:

documentation and built-in systems of active follow-up of factors, such as the stage of disease, age at diagnosis,

‰ Rural registries in regions that are currently “out of sight.” and cervical cancers, childhood acute lymphoid leukemia and

demographic registries. The hospital registry and the provided in the appended tables and graphs. l

demographic registry must run in parallel to ensure that

Figure 1: Survival of patients with breast cancer and cervical cancer according to the period of treatment 1957–2006